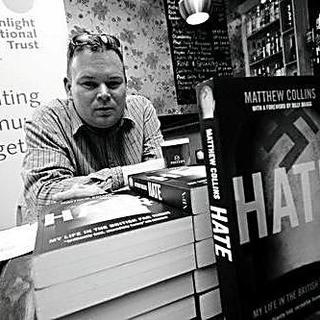 Matthew Collins is Director of the Searchlight Educational Trust, working with communities to build responses to racism and hatred, and develop greater understanding of these issues.

Matthew Collins is Director of the Searchlight Educational Trust, working with communities to build responses to racism and hatred, and develop greater understanding of these issues. There are not many articles written about the far-right in the UK that do not include a quote from Matthew Collins. If he's not writing about the far-right, he's talking about the far-right. Collins is now part of the Hope Not Hate organisation, monitoring, reporting on and disrupting Britain's far right extremists. He's a popular and often controversial speaker on the subject of his former membership of groups like the NF, BNP and Combat 18.

1. The Man Who Was Thursday by G.K Chesterton sums up what life is like in tiny, extremist political cults. Chesterton's cousin was one of the founding members of the National Front, I just wish I read this before I joined the NF...

2. The Lost Revolution: The Story of the Official IRA and the Workers’ Party by Brian Hanley and Scott Millar - continuing the theme of small political parties, this excellent book charts the splits in the Irish Republican Movement and the twists and turns of the Official IRA and its political wing, the Workers' Party during the 1970's and 80's. Superbly intricate and bizarre in places.

3. Pointless: A Season with Britain's Worst Football Team by Jeff Connor Follows the (poor) fortunes of Scottish football club East Stirling over a season. Apparenty they're the worst team in the world. Makes supporting Crystal Palace almost a pleasure.