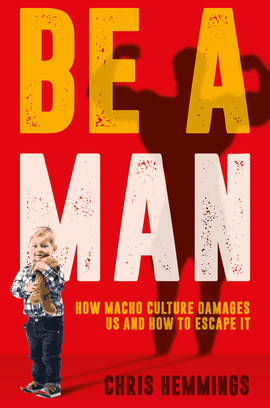 For decades women have shone the spotlight on equality and asked why they’re treated like second-class citizens. They’ve understandably demanded freedoms, rights and legal protections and, while they’ve slowly won some battles, it has been far too long and been far too arduous.

But why is that? Why have generations of men blocked their march towards equality and what impact has it had? Journalist , broadcaster and former ‘lad’ Chris Hemmings sets out to explore why so few men ask such probing questions of their own sex.

How do we raise sweet young boys to become aggressive? Why do so few fathers take parental leave? Why do men rape so many people every year? Why do we still judge success on financial prowess? Why are three times as many men killing themselves as women? In short, how does our masculine determination to be dominant not only impact on the women and girls in our lives, but also the men and boys.

The answer to all these questions, and more, can be determined by discovering what, in 2017, it really means to Be A Man.

“A beautiful, searing book which drips with courage and insight, about how unreconstructed, traditional masculinity is bad for men and women alike. The policing of gender norms hurts us all – and this book is a critical contribution to how we overcome it.”

“I love this book. It’s what I've been longing for – a young man who, as a result of his own experience, is courageous enough to say traditional masculinity is bad for everyone. Bravo, Chris Hemmings!”

"This is a timely and startling book about a very real and dangerously unacknowledged crisis facing young men in the West. Hemmings writes with raw honesty about his own embrace of a belligerent, misogynistic blokeishness and the dawning realisation that his attempts to fit in with lad culture had left him hollow and self-loathing. Part confessional memoir, part academic analysis, he uses his own experiences and considerable journalistic talent as lenses through which to examine the changing nature of the male's role in society. The old breadwinner/homemaker paradigm is clearly broken and this is a bold and well-argued attempt to replace it with something relevant to 21st-century relationships. It makes for occasionally grim reading – so-called men's rights activists are, if anything, even more ludicrous than first impressions allow – but Hemmings's important message is essentially one of hope."

"As a teenager, I was expected to witness unacceptable levels of racist and other forms of violence. This caused a crisis in my masculinity, leading me to the hyper-masculine Islamist ideology as an 'antidote'. Back then, I lacked a modern male role model. This is why Chris Hemmings's book is needed. Someone must give men permission to just be themselves. So, thank you, Chris."