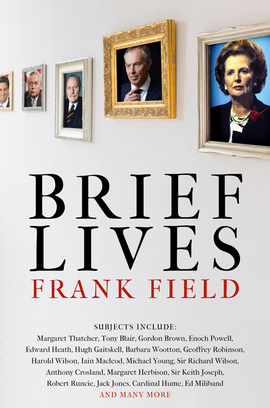 In his Brief Lives, the seventeenth-century antiquary John Aubrey collected and presented vivid pen portraits of some of the greatest figures of his age. With his gossipy, irreverent style and use of interview, Aubrey managed to show dimensions of his subjects that were not on public display.

For some time, Frank Field, former government minister and one of our most outspoken MPs, has been putting together a series of essays with the aim to outline how his own political views and values have been shaped by contact with some of the leading political, religious and academic figures of the modern age.

The resulting book provides personal insights into each of an array of characters, revealing surprising new facets of well-known personalities through specific and often intimate encounters.

This unusual book provides fascinating new insights into some of the biggest political and cultural names of the day.