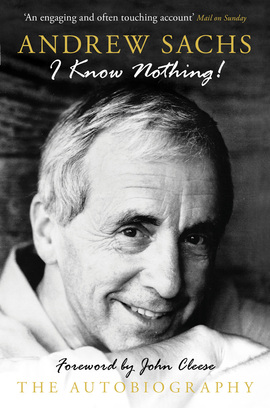 I Know Nothing! The Autobiography

Shortlisted for The Sheridan Morley Prize 2015

From his harrowing childhood as a Jewish boy in Nazi Germany, where he witnessed the horrors of Kristallnacht and Gestapo brutality, to his escape and subsequent life in London, where his antics were no less bizarre or comical than those of his most famous character – the hapless Spanish waiter Manuel – Andrew Sachs has lived a truly extraordinary life.

Recounting hilarious tales of his early foray into the world of showbiz and his time at the most notorious hotel in television history, this delightful autobiography charts Sachs’s conquest of stage, screen and radio, in a career that has seen him showcase his talent and versatility alongside a galaxy of stars. He also speaks candidly about the distressing intrusion into his private life in 2008 – an incident to which he responded with such dignity that it only served to furtherenhance the public’s affection for him.

A charming, witty and utterly compelling memoir, I Know Nothing! reveals the twists and turns of the fascinating life of one of Britain’s best-loved actors and is a must-read for Fawlty Towers fans everywhere.

There is, however, a lot more to the memoir than Manuel… as well as telling a jolly showbiz tale, he can also strike a more serious and insightful tone when the subject matter requires it

[T]his is an engaging and often touching account of someone who has gone through life hellbent on squeezing as much enjoyment out of it as he can.

Talking to Myself
Alastair Campbell Diaries: Volume 8
Ladies Who Punch
Running For My Life