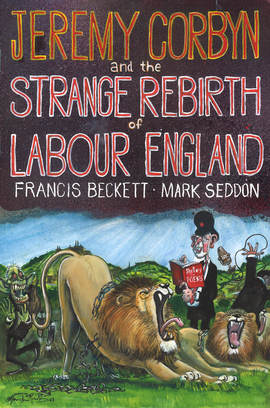 Jeremy Corbyn and the Strange Rebirth of Labour England

By Mark Seddon and Francis Beckett

Post-war Labour England wasn’t a bad place to live, but after Labour’s 2015 election defeat, the prospect of a healthier, happier and fairer country seemed more remote than ever.

Who would have predicted that career backbencher and serial rebel Jeremy Corbyn would be the one to breathe new life into a near moribund Labour Party? Defying all odds, and most commentators and pollsters, Labour staged a remarkable comeback at the 2017 election.

Love him or loathe him – and most people feel one way or the other – Corbyn represents a new hope, which everyone believed had been extinguished by the bitter hostility of the Thatcher era and the grubby triangulations of the Blair years.

Almost uniquely amongst European social democratic parties, Corbyn’s party has rallied. It has turned its back on New Labour, membership is thriving and, at long last, the party is appealing to the young. Labour England wasn’t dead – it had merely been sleeping.

In Jeremy Corbyn and the Strange Rebirth of Labour England, Francis Beckett and Mark Seddon offer an alternative and refreshing take on the sad fate of Labour England over the past four decades. They then turn their attention to the extraordinary reversal of fortunes of the Corbyn years, and to what a new Labour England might look like – with or without Corbyn.

“Could it? Should it? An elegant statement of belief from two masters. I lived through last time – the triumphs and the tears. With this, my breath is well and truly bated.”

“A book that brilliantly challenges the narrow-minded assumptions and misplaced fashionable orthodoxies of most political commentary. In placing Corbyn’s rise in a wider historical context, the authors shine fresh light on its epic significance, while avoiding uncritical hero worship and lazy disdain.”

“All Labour supporters should read this book because those who fail to learn from history are doomed to repeat it. It takes us from the ’70s to now and is highly readable. One does not need to share all the judgements to learn from the story.”

“This brilliant, compelling book is a must-read insight into the peaceful political revolution happening in Britain – and how Labour avoided the terrible fate of many of its European sister parties."