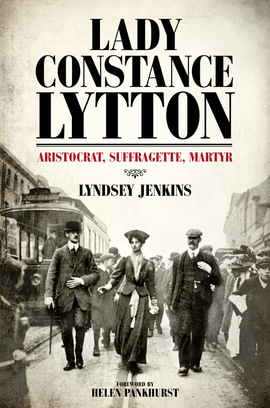 Lady Constance Lytton (1869–1923) was the most unlikely of suffragettes. One of the elite, she was the daughter of a Viceroy of India and a lady in waiting to the Queen. She grew up in the family home of Knebworth and in embassies around the world. For forty years, she did nothing but devote herself to her family, denying herself the love of her life and possible careers as a musician or a reviewer. Then came a chance encounter with a suffragette. Constance was intrigued; witnessing Emmeline and Christabel Pankhurst on trial convinced her of the urgent necessity of votes for women and she went to prison for the cause as gleefully as any child going on a school trip.

But, once jailed, Constance soon found that her name and her connections singled her out for unwelcome special treatment. By now, 1909, the suffragettes were hunger striking and the government had retaliated with force-feeding. The stories that began to leak out – of bungled operations, of dirty tubes, of screams halfheard through brick walls, of straitjackets and handcuffs – outraged the suffragettes.

Constance decided on her most radical step yet: to go to prison in disguise. Taking the name Jane Warton, she cut her hair, put on glasses and ugly clothes and got herself arrested in Liverpool. Once in prison, she was force-fed eight times before her identity was discovered and she was released. Her case became a cause célèbre, with debate raging in The Times and questions being asked in the House of Commons. Lady Constance Lytton became an inspiration and, in the end, a martyr. In this extraordinary new biography, Lyndsey Jenkins reveals for the first time the fascinating story of the woman who abandoned a life of privilege to fight for women’s rights.

A well-written, historically sound biography, you cannot fault it.

“This superb book has been curiously overlooked … Jenkins writes of ‘Lady Con’ with humour and poignancy, making this a life to cherish.”

This is a beautifully written and richly researched biography that reveals how a shy aristocrat became a prominent suffragette. It weaves her intriguing story into a broader landscape of turbulent political change.

Dr Selina Todd, author of The People: The Rise and Fall of the Working Class.

Jenkins is a candid, honest story-teller, and therefore the narrative is utterly engaging.