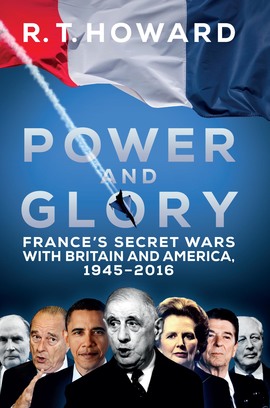 Power and Glory France’s Secret Wars with Britain and America, 1945-2016

Since the end of the Second World War, there has been a subtle but undeniable tension between France and its two key allies: Great Britain and the United States. Resentful of the burgeoning status and influence of the English-speaking world, and fearing the loss of colonial resources and global standing, France has pursued a secret rivalry with her Anglo-Saxon competitors.

This simmering tension has manifested in flashes and flurries of conflict spanning continents and decades. In a bid for power and glory, the French engaged in counter-espionage against British spies in Madagascar, assisted the Argentines during the Falklands War, fought a proxy war with Britain in Nigeria in the 1960s and kindled the tensions that eventually led to the Rwandan genocide.

With material from original archive sources and interviews with diplomats and foreign policy experts, Power and Glory reveals these ‘secret wars’ that the French have fought with their rivals, and considers France’s true motives in Libya and the ongoing civil war in Syria. This extraordinary book tells the story of the curious post-war enmity churning beneath a superficial veneer of unity, and explores how it has shaped relations between France, Britain and the United States in the present day.

“As Howard shows, French diplomacy has been involved in a continuous war of manoeuvre against the Anglo-Saxons. Its existence has rarely been acknowledged, so Howard’s study is especially valuable... it also contains a great deal of useful material”

“Excellent... Howard tells a rattling tale, full of slapstick and bloodshed...One chapter, straight from the pages of Graham Greene, recounts a duel between British spies and French officials in post-war Madagascar...The author is good on the vying power centres in Paris (and) Howard’s chapter on the Falklands War is a thorough dissection of how these interest groups almost prevailed over Mitterrand’s pledge of support to Margaret Thatcher.”