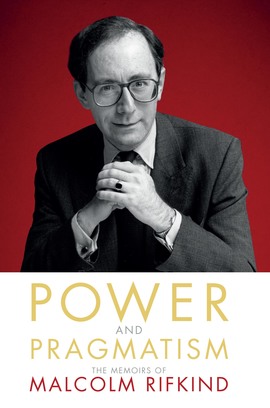 Power and Pragmatism The memoirs of Malcolm Rifkind

Sir Malcolm Rifkind’s political career has been as glittering as it has been long-lived. Indeed, as a minister for eighteen years, he has seen longer uninterrupted service than anyone since Lord Palmerston in the early nineteenth century.

In both the Foreign Office and the Ministry of Defence, during some of the most turbulent years of the late twentieth century, he had a ringside seat at Margaret Thatcher’s historic summit with President Gorbachev, was in charge of British troops during the Bosnian conflict, helped change Polish history during the Cold War, and held secret negotiations on the Falklands with the Argentinians. For his robustness against the Kremlin’s aggression in Ukraine, he is currently banned from Russia by President Putin.

Now, from the man himself, comes the inside story of all those affairs and more. From Rifkind’s battles with Margaret Thatcher over Scotland to his five pivotal years as chairman of the Intelligence and Security Committee, overseeing GCHQ, working with MI6, meeting the CIA, Power and Pragmatism is the shrewd, humorous and frank memoir of a genuine political heavyweight.

“Power and Pragmatism is the vivid and stimulating story of a British statesman, his values and his contribution to a changing Britain and a changing world over the past forty years.”

“Malcolm Rifkind was in the top rank of twentieth-century politicians. Few saw events at closer quarters, and this thoughtful memoir shines a light on his life and times.”

“Comes brilliantly to life during an account of secret talks […] about the future of the Falklands... There is a real sense of the drama of political negotiation [and] Rifkind writes warmly of his opposite number.”

“So genteel and quintessentially British as to be oddly reassuring in these tumultuous times. […] Most readers will find more to get their teeth into as it begins to discuss more deeply foreign affairs and a series of disputes (on Europe, ­Anglo-American relations and the question of intervention) with which we are still dealing today.”

Kind of Blue
Beyond a Fringe
Prime Minister Priti...
Inside Thatcher’s Last Election