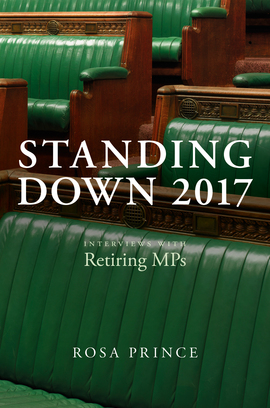 Standing Down 2017 Interviews with retiring MPs

The 2017 general election has introduced us to dozens of new MPs who have entered the House of Commons, but it is also the perfect opportunity to reflect on those who have decided to stand down. In this second edition of the popular series, bestselling biographer and political journalist Rosa Prince speaks with MPs who left the parliamentary stage before the election, including big names such as Alan Johnson, Douglas Carswell, Sir Eric Pickles, Gisela Stuart and Peter Lilley.

Speaking candidly about their best and worst memories, their triumphs and regrets, their personal histories and future plans, these MPs provide frank and revealing insights into their time in Parliament, the historic events they participated in and their reasons for leaving – which are as diverse as their individual political journeys.

Standing Down 2017 casts a light on the fascinating careers of some of the most influential figures in UK politics in recent decades, and is a treasure trove of sage advice and pearls of wisdom for parliamentary newcomers and hopefuls alike.

Theresa May
Comrade Corbyn
Standing Down
Beyond a Fringe