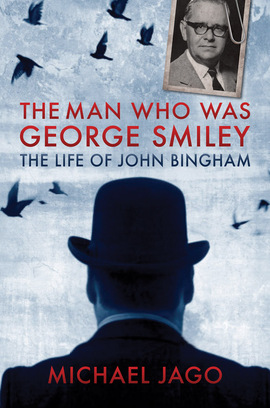 The Man Who Was George Smiley The Life of John Bingham

After a period following the Iraq War, when the reputation of Britain’s spooks has hit an all-time low, John Le Carré’s intellectual hero George Smiley has come to be seen as the perfect spy, a man who would never allow secret intelligence to be misused for political purposes. Le Carré revealed shortly before the Iraq War that the model for Smiley was the author and MI5 officer John Bingham, the 7th Baron Clanmorris. Michael Jago’s brilliant account of Bingham’s life is not just the story of a perfect spy, it is also of a writer whose thrillers transcended the genre, exploring the emotions behind the darkest human behaviour.

As an intelligence officer the bespectacled Bingham had a deep influence on Le Carré, then a junior colleague in MI5. Like Smiley, Bingham was an expert interrogator. His understanding of the human psyche, demonstrated so brilliantly in his seventeen novels, persuaded his subjects to give up the intelligence they were holding deep inside.

He took part in many of MI5’s greatest wartime and Cold War operations, from the Double Cross operation that ensured the success of D-Day, through the tracking of Soviet spies in Cold War Britain to the monitoring of Lord Lucan and others planning a right-wing coup in the 1970s. As Le Carré said, ‘Nobody who knew John and the work he was doing could have missed the description of Smiley in my first novel.’

John Le Carré on the inspiration for George Smiley

[a] brisk and intriguing biography

Competent and fluent, prone to such smooth sentences as ‘The greatest irony is that it was to George Smiley, modelled largely on Bingham, that Le Carré owed his success.