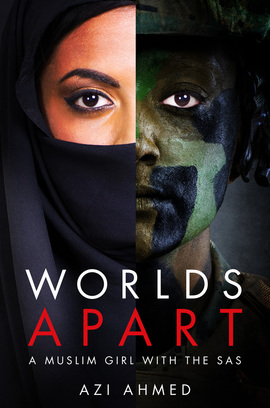 Worlds Apart A Muslim Girl with the SAS

By the age of twelve, Azi Ahmed had been fully trained in all the skills her mother thought necessary to become the perfect housewife: knitting, sewing and sitting pretty. Little did she know that a rather different sort of training lay in her future.

With no military experience, physically slight and, before entering Chelsea Barracks, socially isolated, Azi suddenly finds herself in selection training with eleven other girls and 200 men, all hoping to become part of the British Army’s most elite fighting force – the SAS. She soon realises the physical challenge
is the least of her worries.

Deep-rooted ethnic and gender prejudices abound and Azi is faced with trying to defend her religion and culture within a regimented and hostile environment, a situation that is not helped by the events of 9/11. While Azi deals with non-halal ration packs, squaddie drinking culture and the most rigorous tests of mental and physical strength, her parents, completely unaware of her double life, are still trying to find her a suitable boy to marry. With the two most important institutions in her life at loggerheads, Azi is forced to choose – but will either be enough?

Worlds Apart is the incredible true story of the most violent of culture clashes, of one woman’s fight not only to be ‘the best of the best’, but to remain true to herself in the process.