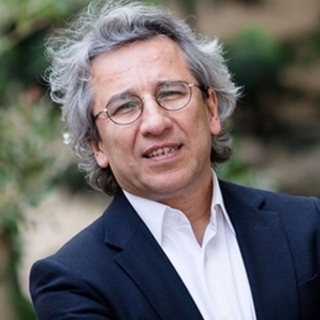 Can Dündar is Editor-in-Chief of the venerable daily newspaper Cumhuriyet. In May this year he was sentenced to imprisonment for five years and ten months for ‘leaking secret information of the state’. He has appealed to Turkey’s higher court.

Can Dündar (b. 16 June 1961 in Ankara) obtained his BA from the Ankara University Faculty of Political Sciences in 1982 before attending the London School of Journalism in 1986. He earned his Master’s degree from the Middle Eastern Technical University Department of Political Sciences in 1988 and his PhD from the same department in 1996. A journalist and lecturer, Dündar has also written over two dozen books and produced sixteen TV documentaries. He was appointed as the editor-in-chief of the venerable daily Cumhuriyet in 2015.