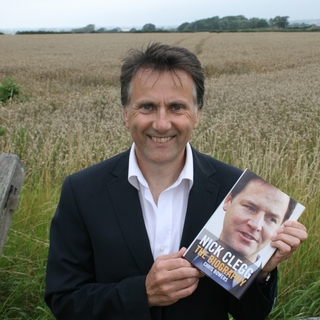 Chris Bowers is a writer and broadcaster who has made his mark in the sporting, environmental and political arenas. He is best known as a commentator on tennis.

Chris Bowers is a freelance writer and broadcaster. He operates in three areas: tennis, environment and politics, and has written a number of books, both for Biteback and for other publishers.

His first book for Biteback was 'Nick Clegg - The Biography', and he went on to write the chapter on Clegg in Biteback's 'British Liberal Leaders', part of a trilogy of books on those who have led the UK's three main parties. He is currently co-editing 'The Alternative', a book on cross-party cooperation among the British progresives, with the Labour MP Lisa Nandy and the Green MP Caroline Lucas.

Among his books for other publishers, Chris has written a fan's guide to tennis, four Davis Cup yearbooks, the first English-language biography of Roger Federer, a book about Novak Djokovic and the history of Serbia, the International Tennis Federation's centenary book, and he ghostwrote Boris Becker's tribute to Wimbledon.