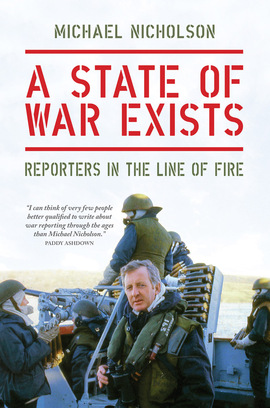 A State of War Exists

“The worst moment in a war was my fear I would not be sent to it.”

So wrote the young Michael Nicholson, a reporter whose astonishing career has covered eighteen major conflicts. Published to coincide with the thirtieth anniversary of the Falklands War, A State of War Exists sees the veteran journalist pondering what made him want to risk life and limb travelling to the most dangerous parts of the world, at the most dangerous times – over 200 journalists have been killed in the last three years alone. Was it machismo or masochism that encouraged him so compulsively and repeatedly to risk his life?

Nicholson introduces us to trailblazers who have inspired him and countless others with their bravery, wisdom and skill in presenting the ‘pity of war’.

I can think of very few people better qualified to write about war reporting through the ages than Michael Nicholson.

Nicholson is one of the most professional journalists you could ever hope to work with - any time, any place.