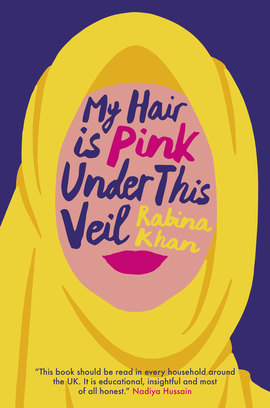 “In 2015, when I ran to be mayor in Tower Hamlets, a smartly dressed middle-class man saw me wearing a headscarf and asked me what colour my hair was underneath it. I gave him a big smile. ‘Pink,’ I replied. Did I win his vote? I rather doubt it.”

Vivid, astute and full of humour, My Hair Is Pink Under This Veil offers a frank appraisal of life in modern Britain as seen through the eyes of a hijab-wearing Muslim woman. Rabina Khan writes with grace about her family’s experiences building a new life in 1970s London before turning her attention to exploring the politics of the veil, white privilege and intersectional feminism. And in depicting her battle to build a successful political career against a backdrop of blame, bias and misogyny – including from her own community – Khan is clear-sighted about the struggles facing Muslim women today.

Now fully updated with new material on the sexism facing women in politics, My Hair Is Pink Under This Veil is at its heart an inspiring story about the power of self-belief and determination to create a fairer world.

“This book should be read in every household around the UK. It is educational, insightful and most of all honest.”