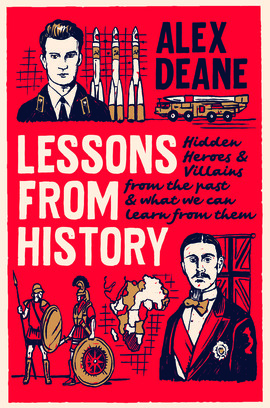 New authors are often asked, ‘Why did you write this book?’ I’m going to give answering that question a go in this post.

I start with a self-aware caveat: I’m not an historian – I am that most English of things, the enthusiastic amateur. I have great admiration for those who’ve dedicated their lives to research and to teaching and cannot claim to be one of them; I work in the City, and history has always been a much-loved hobby.

I began telling the stories as a distraction for myself during the recent coronavirus lockdown(s) in a series of threaded tweets on Twitter (where my handle is @ajcdeane) under the hashtag #deanehistory. I’ve always thought that we can learn from the past, and the first few were just stories I had told to people from time to time over the years. Denied an in-person audience to inflict them on, I took to social media to air them there instead!

The surprising thing to me was how well they were received. They were widely shared and commented upon, and soon people who love history as much as I do were proactively suggesting new stories, as well as adding many interesting digressions and responses. That’s also where the demand for a book of stories began.

So, for a book about history it is a surprisingly 21st-century work – originating on social media and much of it crowd-sourced!

The book is light-hearted – much of the attention it’s received has kindly stressed how funny people have found some of the stories. But it’s also true that, in recent times, I’ve moved from loving history to being rather worried about it. When people are pulling down statues, I fear that we’ve gone too far.

There’s a real risk in modern views that people think this is Year Zero. That all that has come before us is ignorant and wrong and this is the sole generation of wisdom uniquely able to judge those who have come before. Apart from anything else, it’s less than positive because there will come a next generation, and one after that, and I assume we wouldn’t want them to think themselves uniquely enlightened and that we are bigoted barbarians.

So there is a little of that in the book, as well as the humour.

It’s worth saying that, freed from the strictures of the Twitter format, the stories that reappear in the book have been extended and elaborated on, and many other stories appearing in it were not posted online.

Finally, I was writing Lessons from History as my father was dying. Caring for him at home with my family, I was surrounded by his great collection of works of history, which reflected the wide-ranging and random interests that are reflected in the book – and though inadequate as a tribute, it is dedicated to his memory.

Alex's book Lessons from History is out now: order your copy here.