An interview with Anthony Seldon, author of May at 10

To carry on our weekend of politics, we're very excited to publish this interview from author of May at 10 and political biographer par excellence, Anthony Seldon... 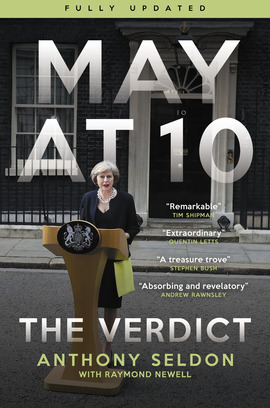 What inspired you to write about May’s time at Number 10?

I have always thought that she was a fascinating politician, and only the second woman out of fifty-four to have become Prime Minister.

You’ve written several other political biographies before. How did writing May at 10 differ to them?

It was the only one of six that I’ve written about serving Prime Ministers, where the entire premiership was overwhelmed and dominated by just one issue, namely Brexit. I worked hard to find other areas that Theresa May was giving attention to, and there were several, including the environment, domestic violence and modern slavery, but her high aspiration of looking after the most vulnerable in society was left incomplete because of the overwhelming focus on Brexit.

So in many ways, it was a tragic story of someone coming into office with such high aspiration and such high-minded beliefs, but unable, in common with so many other premierships, to see their wishes fully realised.

Do you think that overall, the media’s depiction of Theresa May as a hapless PM is unfair?

Premierships are dominated by just one overwhelming issue. If the Prime Minister gets that issue right, then they gain the respect of the media and the public at large. If they don’t, then they have a rough time.

Famously, Anthony Eden failed to take the right decisions over the Suez Crisis in 1956, lied to Parliament, and was swept from power. James Callaghan made a hash of the timing of the general election, which he did not hold in the autumn of 1978, then become embroiled in the Winter of Discontent, and when he did call the election in May 1979, he was swept from power. John Major was the subject of five years of media hostility from Black Wednesday, when Britain was ejected from the Exchange Rate Mechanism of the European Union, until he was swept from power by Tony Blair in May 1997.

Tony Blair himself mishandled his defining issue of Iraq, which he still believes to this day he got right, but which the nation at large and the media thought he had miscalculated. In this broader context, the almost uniformly critical media that Theresa may suffered from is explainable, and in some ways, justified. She had a honeymoon period that lasted from the moment she took over from David Cameron in July 2016, through to her calling a general election in the spring of 2017. The media turned on her during that very long campaign, above all for her volte-face over social care, and then her statement that “nothing had changed” in the election manifesto and in her policy.

With hindsight, the criticism in the press does seem unfair because she had very considerable qualities, albeit perhaps not the qualities most in demand by a Prime Minister at that particular point in history.

What was it like researching the book? Were people (especially politicians) keen to speak to you, or was it hard work?

The book on Theresa May, like the other five, lean far more on civil servants than on ministers and on Special Advisors. Many politicians can be excellent witnesses, who genuinely want to tell you the truth. But too many are not like that, especially those who seek you out and want to speak, so one has to be careful with politicians. But I’ve found, ever since my first book, which was on Churchill as a peacetime Prime Minister, written almost forty years ago, that in fact it is the politicians who are often less revealing, are less objective and have less good memories than the civil servants.

What are the challenges of writing a political biography?

The answer is that there are many, especially those that you don’t foresee. The risk is that if you don’t get close to the subject of the book, and their friends and working colleagues, then you will never get the inside information which is absolutely vital and which makes any biography interesting. But the great risk of getting close to the subject and those around them is that your objectivity is compromised, and you end up losing your perspective. Everybody in politics is in politics for a reason, which may of course often be a good reason and a genuine desire to serve but often is not. Writing political biographies can be enormously hazardous the more controversial and unpopular a figure is. So not easy, but a great deal of fun.

What’s one thing you hope people will take away from reading your book?

I hope very much that they will recognise how extremely difficult it is to be Prime Minster. Few people genuinely understand that, and there are such high expectations of the office holder. But it is a book which is also truly sad, because Theresa May started out with such high hopes: this was the culmination of her entire life. She had devoted her entire life to politics, she had not been able to have any family, and she was a very single-minded politician who’d had some high success as Britain’s longest-serving Home Secretary for many years.

But she struggled from the moment that she went into Number 10 with the all-dominant fact of the requirement to get Britain out of the EU, which in her heart of hearts, was not the issue that brought her into politics. She wasn’t one of those UKIP-tendency, or Eurosceptic, or Ultras in the Tory Party for whom the EU was a terrible thing. She had a balanced view about the EU, and more importantly she had no clear view about what she wanted from the EU or from its departure. And understanding the complexity of life in Number 10 and the maddening complexity of the EU and extricating Britain from it, would be the biggest single thing which I hope people would take away.

What are you working on next?

It’s the 300th anniversary of the first Prime Minister, when George I asked Robert Walpole to become his First Minister in 1721. I’m writing two books next year: the first is an illustrated history of Downing Street itself, which is an extraordinary building, and also a book analysing the three hundred years of Prime Ministers, looking at issues such as when did the Head of Government (ie. the Prime Minister) take over from the Head of State (ie. the monarch) as the key figure in British politics; how and why has the office of Prime Minister been the longest continuously-serving office in the Western World; and indeed is it still the same job as Robert Walpole did three hundred years ago.