An interview with Barbara Hosking 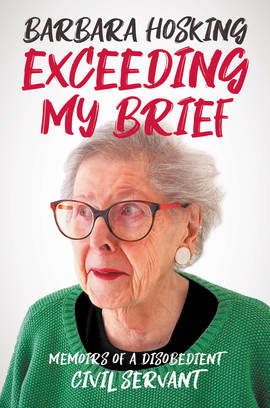 For the last day of the Biteback Book Festival, we talk to one-time press officer to Harold Wilson and Tedd Heath, Barbara Hosking...

What made you want to write your memoirs at the age of 90?

My friends made me write them because they said, ‘You keep on after dinner or after lunch, telling us all about what you did and you’ve got these lovely stories, so why on earth don’t you write them down, so other people can have them?’ It’s a big job: it took me about a year and bit!

What do you miss now about your childhood?

It was lovely because we didn’t have all this technology. We didn’t have laptops and iPhones and all this stuff, which I’m not terribly good at and I find very confusing. I can do it, but it does take me a while.

What were Harold Wilson and Ted Heath like to work for? Ted Heath had a fearsome reputation; was he difficult to get along with?

I was very careful with him to start with because he had that reputation. He had a big temper, and he was difficult and wanted things to be absolutely accurate and right. I was careful with him, but I found that I got on very well with him for two reasons. One was that his life apart from politics was the arts. So was mine, so I had that in common with him. Then I agreed totally with his wish for us to go into Europe, so I loved my time with him because I was doing what I believed in.

What do you think about Brexit?

Brexit? It breaks my heart. It really breaks my heart. It’s the wrong thing to do. We should stay in Europe and be an important part of it, and help to direct it, instead of reneging on it and going on our own. We’re just a little foggy group of islands in the North Sea, and without the EU we’ll come under the orbit of the US and just do what Trump wants. It’s going to be awful for our children.

What was the favourite job you ever held?

I think my favourite job was probably the last one I did, when I was deputy chairman of west country tv. Because I was in a position of authority, and I had a great deal of control over what we did, and so I could get programmes in the Cornish language on our screens, and everyone complained and said it cost a lost of money. And I said, it’s very good for our image. So we did it.

Do you think politics has become more polarised?

No, I just think that the Labour party has been out of politics for a while. It was so busy with itself trying to- I don’t know what it was trying to do, go very left wing, sort of strike out in some new extremely left wing way for itself- but it didn’t take any notice of the fact that it should have been Her Majesty’s opposition, and doing that job well. Democracy needs an opposition.

​What do you think about Keir Starmer’s appointment to Head of the Labour Party?

It’s an excellent appointment, because he’s got the stature and the public respect to be a proper leader of a party, and I think that he’ll do a very job. However, he’s also got to bind up all the different parts of the Labour party and make it into an opposition. There’s a lot to do, but the person I actually feel sorry for is the Prime Minister, Boris Johnson. He was really a good weather Prime Minister, a jolly, happy cheerful guy, and he goes into the worst crisis this century. It must be hard on him.

The issue of sexual assault has become more mainstream in recent years, with several politicians talking about their own experiences in the House of Commons. Do you think the culture around this is slowly changing?

Yes, I do. I think that the attitude to working women has changed a great deal. When I first started working, which was in 1945-46, just after the war, women were expected to put up with the odd sort of, slap on the bottom or an almost-grope. And you were expected to put up with it. Abuse is such a vague expression, because I used to think that abuse meant, you know, that it had to be hands on. Whereas today it’s much more nebulous: it’s very difficult to know what it means.

Do you think women find it hard to get their voices heard in politics?

I think that Mrs Thatcher did. There she was, coming into the House of Commons with a burning ambition, and a very good sharp mind and good looks, and she just had to do the best she could. She would be insulted by these Tory MPs. I wish it wasn’t like that but it is.

It’s being with young people. I love to be with people younger than myself: I love to listen to them and know what they’re thinking. I love to probe them and ask them what they mean by these grand statements. But I am totally energised by people. I don’t like being on my own; I haven’t been to a shop for a month. All I see is Margaret, which is lovely. She’s marvellous.

What are you reading at the moment?

I’m reading all sorts of things. I’m reading what’s here, but I have been catching up with writers that I haven’t read, like White Teeth by Zadie Smith. I found her a bit difficult at times, but I liked it and I thought I was quite moving. I’m also reading a non-fiction memoir called White Muguls by Williams Dalrymple, about the English in India two hundred years ago, when they turned into muguls. They had stacks of money! So they took up their ways and often moved to Islam. They really went native.

Barbara's book, Exceeding My Brief: Memoirs of a Disobedient Civil Servant, is out now and only £4.99 until the end of today. Take a look here!