Ann Bracken on life in the White House

What is life in the White House really like? Ann Bracken knows: she spent several years working as George H.W. Bush's secretary! From early morning runs to playing tennis with Pete Sampras, Ann really has done it all- and here we ask her some questions about her life with the President... 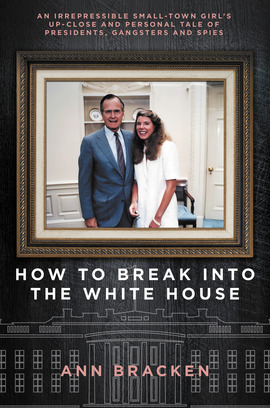 Why were you so determined to get into the White House?

Because I wanted to aim as high as I could, and if you grow up in Muncie, Indiana, the White House is as high as you can aim.

What made you write the book?

To encourage others to aim high, to show what working in the White House is really like and that starting in a very humble role doesn’t matter, as energy and enthusiasm will soon make it bigger. To remind everyone what a wonderful President George Bush Senior was.

How did you get into the White House?

By studying overseas, at the LSE, then working for my Senator from Indiana, getting to know everyone already working there – and sheer determination. I knew the President but never dreamed of asking him for a job. I was determined to get there through my own efforts.

How did you befriend the Secret Service?

By going jogging with them!

What happened when Queen Elizabeth made her ‘talking hat’ speech at the White House?

When we set up the podium with the microphone, the head of protocol forgot how tiny the Queen is, so when she made her speech all that could be seen of her was her hat!

Who were your favourite visitors?

What was the great national security advisor General Scowcroft most famous for?

Sleeping through Cabinet meetings because he claimed that nothing important ever happened in them!

Very smart politically, more of a real Texan, more in touch with ordinary Americans. But he was a politician, not a statesman.

My Senator managed to overthrow a nasty government in the Philippines, but most of his time had to be spent in non-stop fundraising and dealing with lobby groups like ‘Beer Drinkers of America!’ My job was to thank supporters and reply to critics – ‘Reasonable people can disagree’ – though most of them didn’t sound reasonable at all.

A genuinely super nice guy who really wants to do the right thing, if his ‘progressive’ friends will let him.

Why were US politics better then?

Because there were more Senators who tried much harder to reach compromises with their opponents.

Who runs the White House?

The US Navy. So, in the mess there’s a lot of fish!

What about life after the White House?

No one can stay there very long. All you have time to do is work and sleep. You can’t really talk to anyone outside. Everyone is exhausted So there comes a moment when you need to leave – and to understand that politics is not what is most important in most people’s lives. So, the book is also about how to adjust and enjoy life afterwards.

How to be an alien?

I really love the Brits and their damp and foggy island. But I was warned they could be snooty about culture. So, I studied art at Christie’s for a year and befriended Philip Treacy to get access to his hats.

On your last day at the White House, what would you say to someone just coming in with new administration?

Be early to every meeting (being on time was considered late); wear business suits and low heels (but have tennis shoes for daily running around the complex). I always wore bright-coloured suits (red, yellow, purple), which I think was appreciated in a sea of blue, black and grey. Be enthusiastic and willing to do anything – once you are in the White House complex (having to get top security clearance from the FBI to be there), you realise there are very few people actually there in staffer jobs.

Other than the very important jobs (President, VP, national security advisor, White House counsel and chief of staff), everyone else is secret service, a secretary or an aide. My title was special assistant to the President for Presidential Personnel, which meant officially I helped choose the presidential appointments – Cabinet secretaries, ambassadors, Supreme Court Justices etc. – and helped them get confirmed by the Senate. But in fact, I took over the intern program (because no one else offered), and I had the interns set-up for state dinners and presidential arrival and departure ceremonies on the South Lawn when he left or arrived in Marine One. I procured furniture for the national security advisor from the Navy, I went running with the President, played tennis with the President and helped the press secretary with press conferences.

I made myself available to work on anything that was necessary, as the secretaries were tied to their desks and the important men and women were running the country. Working this way, instead of just sitting at my desk, let me meet not only everyone in the White House but most of the President’s visitors. After Pete Sampras won the US Open at age nineteen, the President invited him to play at the White House. His son, Marvin, was the third, and I was asked to play as the fourth for a game of doubles. Things like that happened because I was known to the staff as available and enthusiastic.

Lastly, say goodbye to a social life. You will not sleep, and you are tested for drugs regularly, so no help with medication. But it’s the greatest experience and the contacts and skills you make will last a lifetime.

Interest piqued? Ann's book, How to Break Into the White House, is out now: get your copy here.