With his new book  Royalty Revealed just out, author Brian Hoey picks up his pen to introduce us to the royal family once more! 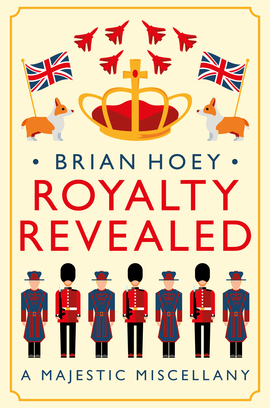 One of the reasons why I decided to write this book is because so many people, from countries all over the world, have been contacting me to ask questions about various members of the Royal Family. So I thought it might be a good idea to put the correct answers together in alphabetical order, as a form of reference for any and all royal watchers.

Newspapers, magazines, radio and television stations in places as far apart as the United States, Canada, Australia, New Zealand and Japan want to know things like: how tall is the Queen (page 128)? Does she have a bank account and a cheque book (page 51)? Who designs Her Majesty’s clothes and helps her to dress (pages 81–82)?

Quite a number of people want to know if they are allowed to send cards and gifts to members of the Royal Family at Christmas and on birthdays. The answer is yes. And if you write directly to the Queen, will you receive a reply. Every single letter she receives (and there are around 1,000 every week) will be acknowledged. But do not send boxes of chocolates or any other foodstuffs. They all, unfortunately, have to be destroyed in these uncertain times. If you want to send a letter, though, the form of address when writing to the Queen is explained on page 106.

There appears to be a lot of confusion about who in the Royal Family is entitled to use the style HRH – His or Her Royal Highness. This is revealed in full. Also, is it true that nearly every member of the Royal Family has a whole string of additional titles to their name, as well as the one for which they are most commonly known? Find out on pages 236–37.

Her Majesty’s Garden Parties at Buckingham Palace and the Palace of Holyroodhouse in Edinburgh attract an enormous amount of interest, with people from all walks of life, from all over the world, anxious to be invited. What are they like and how can you obtain an invitation? (Pages 122–124)

I have also received scores of messages from men and women throughout the UK and further afield, all wanting to know how they can get a job in the Royal Household and how much can they expect to be paid. Well, there are always vacancies at the Palace and every enquiry, whether by email, post or in person, is taken seriously. However, don’t expect to get rich working for the Royals. They don’t have to pay top dollar to attract the best people. The prestige of being employed by Her Majesty is more than enough for a few years, and can usually guarantee a much better paid job on the outside later. (Pages 221–223)

The Queen is attended by a number of Ladies-in-Waiting, most of whom have been with her for many years. In fact, the senior Lady, a Duchess, is 100 years old. Who are they and what do they do? The answers to all this and more can be found on pages 147-49.

I hope Royalty Revealed will answer all the questions that have been asked, as Buckingham Palace has been helpful in ensuring the accuracy of this book by confirming purely factual details, as it invariably does. But any additional comments are mine and mine alone.

Royalty Revealed is now available to buy on the Biteback website: take a look here.