Clive Irving on the relevance of the monarchy

The Queen’s passing will prove to be the end of an age as distinctive as the one marked by the death of Churchill. That was the end of what might be called the heroic legend. This is the end of something larger, a period of history in which the nation was largely stable, settled and united. The Queen bookended that period. And now it is irretrievable, gone.

She proved the theory of the Crown as continuity and the focus of unity. Brexit was an act of violent discontinuity, and the union is no longer united in the same way – and won’t ever be again. These forces have nothing to do with the change in monarchy, and Charles did not precipitate them. He inherits them, though, and they will be beyond his role to influence; they are too political and tribal.

Any cosmetic remodelling of the monarchy will be just that – a rationalisation of its size, the merging of three courts into one, the casting off the free-loading relatives. That’s family business, not the nation’s.

As the New York Times reported, Charles grew very rich as Britain endured Osborne austerity and poverty levels rose, and he has the appearance of an old patrician, with the bloom of an epicurean life on his cheeks and a fruity voice to match. His optics are wrong. How relevant the monarchy seems under his reign remains to be seen.

CLIVE IRVING is a columnist for the Daily Beast in New York. He has had a long and distinguished career on both sides of the Atlantic, with an unusually wide media experience: as a pioneer of investigative journalism at the Sunday Times; as a colleague of David Frost in transforming live television journalism; as a top magazine editor in London and New York; and as an early contributor to the Daily Beast. Coincidentally, his career in journalism and as a frequent critic of the monarchy has run in parallel with the Queen’s entire reign. This gives him a unique insight into how the Queen has dealt with enormous social and cultural changes and, particularly, how the world’s perception of the royal family is now, more than ever, decisively shaped by the media. 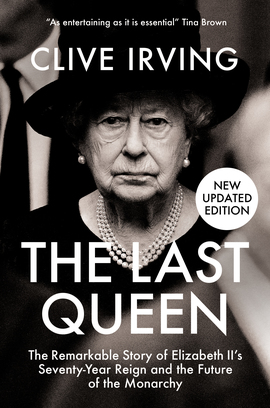 In The Last Queen, pioneering investigative reporter Clive Irving paints a revelatory portrait of Elizabeth II’s extraordinary reign, setting it within the dramatic transformation of Britain itself over the same period. Now expanded to include the death of Prince Philip, the fallout from Megxit and the banishment of Prince Andrew, this compelling account asks: how long will the institution survive beyond the second Elizabethan era?

Listen to Clive Irving on Biteback Chats Books podcast here. We talk to him about the royal family's relationship with the media, his time working on Fleet Street and what he thinks about the future of the crown...