We’re kicking off 2023 with a topic that refuses to go away: antisemitism.

Dave Rich, one of the UK’s leading experts on antisemitism, has worked for almost thirty years for the Community Security Trust, a Jewish charity that protects the UK Jewish community and advises many organisations on how to tackle antisemitism.

Now he has written Everyday Hate, a book with a mission to define and explore all strands of antisemitism. Hear from the author himself on why he wrote the book and how important it is you read it yourself. 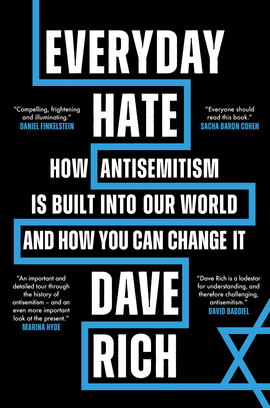 Why should I care?

Jews shouldn’t matter to anyone, really. There are only around 15 million of us in the whole world – fewer than the number of followers Wayne Rooney has on Instagram – and around 300,000 in Britain. Jewish people are, numerically speaking, an insignificant dot in the global population. And yet, 23 per cent of all religious hate crimes in England and Wales last year targeted Jews. Thirty-four per cent of 18–24-year-olds believe that ‘Jewish people have an unhealthy control over the world’s banking system’. Antisemitism is back, on the streets and online. And don’t even get me started on Kanye West.

We urgently need to make sense of why this is happening. This is an ancient prejudice, a set of weird superstitions and myths rooted in medieval religious bigotry that somehow is just as much at home on TikTok and Instagram as it was in Chaucer and Shakespeare. Antisemitism is familiar to most Jews, as you’d expect, but not to most other people, and that ought to change. I’ve worked in this field for nearly thirty years, and one thing I’ve learned in that time is that there is not nearly enough understanding of what antisemitism is, where it comes from or how deeply rooted it is in the unnoticed assumptions that our society holds about Jews and Jewish things.

One thing I don’t do in my book is assume the worst. I’m an optimist, and most people in Britain, when asked by an opinion pollster, say they like Jews. I believe them. Most people are decent: they do not want to be bigots and do not want to think of themselves as prejudiced. But antisemitic ideas and stereotypes are widespread, even if antisemitic people aren’t. Stereotypes about Jews are embedded deep within our culture and language, found in our best-loved literature and woven into the fabric of our society, and they emerge in the most everyday places. Maybe it is a comment about the Holocaust, or an argument about Israel, or a joke about having a Jewish accountant because you know how good they are with money.

There is no shame in not understanding the often obscure and curious patterns of anti-Jewish thought and action or, if you read my book, in finding some of it disturbingly familiar. It is foolish to imagine these ideas would simply disappear just because we like to think of ourselves as a modern, liberal, diverse nation. Traditional ways of thinking are not erased so easily, and antisemitism has its uses at times of social, political and economic turmoil.

I’ve written Everyday Hate at a time when there are lots of new books about racism and, more broadly, a new consciousness across society about the significant impact of race and racism on how our world works. This is a welcome development, but anti-racism is not complete if it doesn’t include tackling antisemitism. I hope my book fills that gap.

Everyday Hate is out 16 February. Click here to pre-order your copy.

Like the sound of this book? Ask and answer some more big questions with these books with ideas, and why not try some of our religious titles!