Top human rights lawyer Geoffrey Robertson sits down to talk about the publication of his new book Bad People, and why he wrote it... 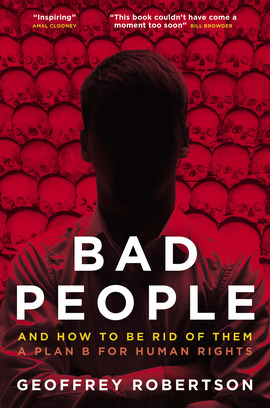 When I began to write this book, early in lockdown, very few people had heard of Magnitsky laws or of targeted sanctions for human rights abusers. But in the approach to publication day, sanctions have been in the headlines; imposed on Chinese apparatchiks who run the Uighur concentration camps, imposed on Russian officials involved in the poisoning and jailing of Alex Navalny and imposed on Lukashenko and his ministers in Belarus. Western governments are finally taking some actions against bad people, but in a poorly coordinated way and without thinking through the implications. I wrote this book to explain how and to what extent these sanctions can work and whether they will help to stop the slide towards authoritarianism.

The problem with autocracies is that they put themselves above international law and do not accept its rules or the rulings of the International Criminal Court (ICC), which was set up to enforce them. These formed ‘Plan A’ as a means of punishing those who violate human rights. But this plan has not worked – the ICC, despite costing $1.5 billion – has only managed to convict a few central African warlords. It has of course produced a lot of jurisprudence about human rights principles, but it cannot enforce them because perpetrators are mostly protected by big powers with vetoes in the Security Council on any UN action – Russia, China and the United States. So, it is time to turn to the only laws that can realistically be enforced, namely national laws, which can stop people and tainted money from entering a specific country and confiscate ill-gotten gains.

I believe it is possible for sanctions under national law to go much further – not just to name, blame and shame perpetrators of human rights abuses, but to damage their businesses and to stop them sending their children to schools and their parents to hospitals in the West. Most importantly, such sanctions can catch their corporate accomplices – for example, those brands that buy cotton produced by the slave labour of Uighurs. Magnitsky laws are not just symbolic but put specifically ostracise those people who deserve to be beyond the pale of decent societies. This was the insight vouchsafed by the judgment at Nuremberg; that crimes against humanity are committed by individuals, not by states. These laws can strike at ‘enablers’ – the middle-class professionals I call the ‘train drivers to Auschwitz’, who include the lickspittle judges, overzealous prosecutors, accountants and lawyers who conduct unfair trials or hide and move the proceeds of crime.

But it is early days. We now have Magnitsky laws in thirty-one countries – US, Canada, UK and the EU member states – all countries in what I would not term as the ‘West’ but the ‘White West’. Japan is contemplating such a law and India, Brazil and Singapore should be encouraged to follow suit. They are all countries which could be described as having ‘parliamentary peoples’; they have a commitment to democracy and to the rule of international law. A level of coordination must be developed – we should not have anyone sanctioned in Britain being welcome in Europe, and vice versa. We must be careful about US leadership: the power of the dollar is vital in making its sanctions effective, but its behaviour under Trump in sanctioning the ICC prosecutor, just because she was investigating American war crimes, was irresponsible. And sanction laws must provide for due process – its targets should have an opportunity to refute allegations and have themselves removed from the list.

Bad People – And How to Be Rid of Them: A Plan B for Human Rights is the first book to be published about the sanctioning of human rights abusers and I am sure it will not be the last. I hope it will explain what is a new and potentially powerful weapon in the hands of those fighting for human rights.