Ahead of the publication of his book Populism on Trial, former judge and barrister Inigo Bing talks about his inspirations and the dangers of populism...

What inspired you to write Populism on Trial?

I would not use the word ‘inspiration’, it was more a realisation that the judiciary were becoming a target for ill-informed attack from angry politicians and journalists, which were often in the form of sneers and jeers. There was precious little truth in what was being written and said about the role of judges in modern Britain. I thought it was time that the words ‘rule of law’ were explained properly. We take it for granted that we have a rule of law and that judges are independent, but what exactly does this mean? The more I thought about it the more I realised that populism was drowning out some obvious truths about law and our unwritten Constitution.

I then started to try and find out how this all started. Why did judges become the target for attack? It started in the mid-1990s when populism became a part of politics. The more I looked into it, the more concerning the attacks on the judiciary had become. The notorious headline about judges being ‘enemies of the people’ was part of a trend and it continued with the attack on the Supreme Court in the prorogation decision. I decided that it was time for the anti-populist arguments to be made as strenuously as the populist ones. Serving judges cannot answer back because of their independence and political neutrality. As I am now retired I thought that I could put my experience to good use and put across the other side of the populist appeal.

Can you sum up what it’s about?

Basically, it is about three things: populism, the rule of law and the threat populism poses to the rule of law. I have devoted the early part of the book to trying to define what populism is. In essence the politics and economics of globalisation have left many less well off than they expected to be and these people have felt helpless in tackling the forces beyond their control. Populism appeals to this sense of disaffection and says: ‘Listen to us, we can solve your problems for you.’ The solution they offer is simple: ‘Your problems have been caused by elitists, remote systems of government and international institutions. It’s not your fault. We can represent you directly by changing the way these institutions have failed you.’ Therefore, populism is a creed of direct, not representative, democracy. This sort of democracy is different from our traditional model. First, everything is simple, not complicated. Second, language must be strident and uncompromising. Third, there must be a charismatic leader to deliver the message. Once in power, populists try to dismantle the institutions that representative democracy protects. President Trump called it ‘draining the swamp’, but we must not pretend the same processes are not going on in Britain. Representative democracy is never a single voice. Our elected representatives should reflect a plurality of interest where the majority may rule, but where minorities must be protected and the majority must not become a tyranny.

Over the last twenty-five years the inevitable tensions that exist between the judiciary and the executive on the one hand and Parliament and the executive on the other have become strident and shrill. The judiciary have been caught in the cross-fire. I have picked a few controversial cases in criminal law, immigration and human rights where judges have suffered undeserved hatred and contempt. I have tried to explain what led to those decisions and the broad principles that the judges applied. In this way I hope that the book will make the public better informed about how judges go about their tasks. Finally, I have offered some thoughts of my own about how populism should be challenged. 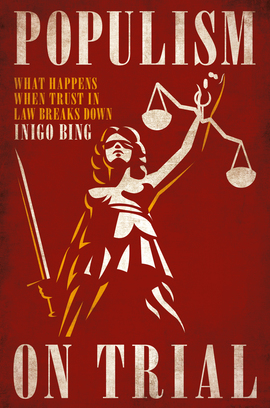 What challenges face those people making and upholding the law in Britain today?

For those making the law – MPs and peers in the two Houses of Parliament – the main challenge has been the arrival of referendums in British politics. There have been quite a few: on devolution, proportional representation and the creation of mayors for example, but the referendum on the membership of the EU presented a big challenge. Who is more powerful? Those who were elected to represent us in a general election, or the people who voted directly in a referendum? This question has not properly been answered and it is a challenge which those who make laws must confront.

For those whose job it is to uphold the law, the main challenge is to maintain strict judicial independence. Judges are good at stoically withstanding unfair criticism but the government holds the purse strings. Law is undermined if there is no functioning court system, if legal aid is withheld in deserving cases and if an all-powerful state is not held to account by the judicial review of executive decisions. It is common knowledge that our courts are underfunded and now there are moves to restrict access to judicial review. Serving judges, led by the Lord Chief Justice, have been courageous in standing up for the rule of law, but sometimes it is necessary to go further and to expose what may lie behind a determination by politicians to threaten the values of toleration and pluralism which underpin law. This is a big challenge which is really a political issue and my book tries to confront it. Serving judges cannot do this as they would be entering a political debate which their independence forbids them from doing.

How have recent tumultuous events such as Brexit affected people’s trust in the law?

Brexit and its aftermath affected trust in our institutions enormously. At the heart of this was the clash between Leavers led mostly by Conservative politicians against their Remainer leader, David Cameron. Those who were against Cameron believed, when they won, that the referendum result should be interpreted as a direct instruction. This meant that it was an instruction to Theresa May. This inevitably involved side-lining Parliament, yet Parliament was supposed to be one of our trusted institutions. On the other side of the argument there were those who said that despite the referendum, Parliament remained supreme and it was for Parliament to decide how, when and on what terms Britain would leave the EU. This clash involved trust on many levels. Judges were called ‘enemies’ and those who wanted a sensible parliamentary debate about Brexit were called ‘Remoaners’.

Trust was shattered all over the place and in the turmoil some simple constitutional principles were forgotten. When the judges were drawn into a battle that was already fractious and unpleasant it was inevitable that the trust in law would suffer as a result.

What are the dangers of this?

I think the dangers are all too clear. The tensions between politicians and judges had been simmering for a number of years, notably in the clashes between Michael Howard, when he was Home Secretary, and the judges during the early 1990s. Brexit provided the opportunity for this simmering discontent among those who thought judges were too powerful to come to the surface. This is dangerous because the rule of law is fundamental to a liberal democracy. If we believe in personal autonomy, gender equality, privacy, freedom of speech and assembly and so on, we depend on the rule of law and the independence of our judges to protect these valuable results of human progress. If the judiciary are perceived as just giving human rights to rapists and murderers or meddling in politics where they have no business to be, then the rule of law which protects us all is undermined. There are clear signs now that this is happening and I have drawn attention to this in the book.

What can law-makers and the government do to help fix this deteriorating trust?

The first thing they can do is not to pretend there is a crisis in the rule of law and our Constitution. There is a general assumption within this present government that there is a real problem with democracy, rights and our Constitution. The Conservatives have promised to set up a commission to look into this. The reality is there is no crisis in our Constitution, although there are anomalies, nor is there anything wrong with judges using the European Convention of Human Rights when deciding cases. Judges absolutely recognise Parliament is supreme, which is something that those who passionately want to leave the EU often do not admit. There is no crisis about rights and democracy which needs fixing.

The second thing they can do is to recognise that in our unwritten Constitution there are ‘conventions’ which are necessary to hold the fabric of our fragile Constitution together. The Victorian scholar, A. V. Dicey called these the customs, practices and maxims of the Constitution. These provide the scenery on the political stage. Unfortunately, these ‘rules of the game’ as they are sometimes called, are now routinely broken. The independence of the civil service is being undermined, power is being drawn away from Parliament and the Cabinet into 10 Downing Street, and the integrity of professional diplomats is under threat. In all past political controversies the ‘rules of the game’ were respected and honoured. Not any more. I regret that.

What’s the most important thing you’d like people to take away from reading Populism on Trial?

There are actually two things. First, the absolute positive value of the rule of law. Too often we just assume we have a rule of law without actually thinking what it means and how important it is in holding tyranny and absolutism at bay. Second, I want people to believe that a sense of history is very important when getting to grips with modern problems. There is no better yesterday. When judges were too timid to hold the executive to account (as they were), or the police were above the law (as they often were), Britain was not a better place. I hope that readers will take from the book a realisation that we cannot capture a time gone by when tensions between law and politics did not exist. Tensions are healthy but undermining law is the route to despotism.