On the publication day of London's Mayor at 20, Jack Brown tells us why he, Tony Travers and Richard Brown decided to put pen to paper... 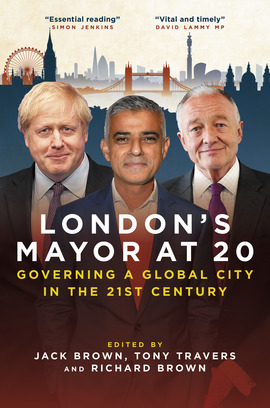 The position of Mayor of London, established in 2000, turned twenty this year. So perhaps it is appropriate that the mayoralty is finally moving out of the house it grew up in. The Greater London Authority – which consists of the mayor and the London Assembly – is set to shift from City Hall near London Bridge to the Crystal building in the Royal Docks in 2021. The move is hoped to save £61 million over five years, and help aid regeneration.

The mayor’s parents should be pleased. In fact, former Prime Minister Tony Blair, whose government created the position, has written the foreword to our review of the mayoralty’s first twenty years. He was one of several who could claim parenthood of London’s mayoralty. He seems a proud father today:

‘Could we imagine not having a Mayor of London today? … Never forget that the position of a London mayor was at the beginning politically controversial – the 1980s had seen the abolition of the Greater London Council – and three terms of government were important in bedding the institution down. Now its abolition would be unthinkable.’

Centre for London and Professor Tony Travers of the LSE are keen observers of London government. At the start of the year, we decided to team up to commemorate and evaluate the first two decades of the London mayoralty. A team of expert, independent contributors were commissioned to evaluate the performance of successive mayors in a range of different policy areas: from transport to culture, economic development to policing. Well-placed practitioners were asked to share their recollections of key moments in the very recent history of London and its government, under all three mayors, in a series of short ‘vignettes’ that help bring the story to life.

After the decision was taken to mark the occasion with a book, the capital was hit by the coronavirus pandemic. The challenges of writing the book suddenly seemed somewhat less significant. The capital’s streets fell silent, particularly in central London. Transport for London’s finances were plunged into crisis, as fares evaporated. London’s future itself seemed bleak and uncertain.

Less significantly, the book’s authors were also locked indoors. This provided time to write, but it did not necessarily help with morale. With a little distance, I can now look back and say I am proud of what we have produced.

The book arrives at a time of great uncertainty for the future of both London and its mayoralty. Relations between central and London-wide government are perhaps at their worst in the mayoralty’s twenty years. London-wide government has been repeatedly established, reformed and abolished by central government in the past. Is there is a chance that this book, published to celebrate a significant anniversary for the mayoralty, could also end up as its obituary?

We hope not. While there are strengths and weaknesses in mayoral power and performance, both across its twenty-year existence and today, the book is broadly positive about the role itself. It has delivered significant major projects for London, from the Olympics to Crossrail (even if the latter has taken a little longer than first hoped). It has driven improvements and innovations in the capital’s infrastructure, and provided important civic leadership for Londoners at times of celebration and crisis. The mayor has been a powerful advocate for the capital, both to central government and around the world, to the betterment of the city and its people.

We hope that the mayoralty’s future will be bright, and that taking a moment to pause and reflect on the last twenty years now will provide some lessons for the next twenty, as well as for city governance elsewhere in the UK and around the world. But on top of that, I assure you it’s a cracking read.

Interest piqued? London's Mayor at 20 is out today: take a look here!