Peter Brookes: life as a cartoonist

Peter Brookes has made a career out of skewering the rich and famous. From the Prime Minister to backbench MPs, his hilarious sketches have graced The Times for years, resulting in several art exhibitions and ten books, the latest of which- Critical Times- was published by Biteback at the start of this month.

But how did he become a cartoonist? And who are his favourite subjects to draw? We sat down to find out more about the man behind the drawings. 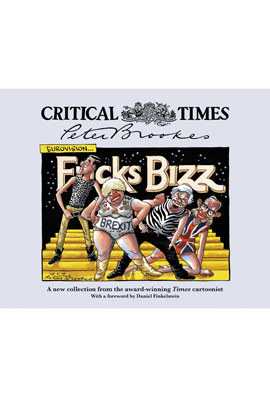 How did you become a cartoonist?

I was recruited by the New Statesman to deputise for Nicholas Garland when he was on holiday, in the early 70s, shortly after leaving art college. I’d always had the interest, but never the confidence, to pursue political cartooning. I remained an illustrator for another ten years or so before joining The Times as their political cartoonist. But it wasn’t until 1992 that I took this up full time.

What’s the best/ your favourite cartoon that you’ve ever drawn?

I think it was probably the cartoon I drew during the Tory leadership race after Cameron resigned in 2016 following the EU Referendum. Boris Johnson was about to announce his candidature, when Michael Gove (who was running his campaign) decided to stand against him. It was a highly charged, outrageously disloyal (on Gove’s part) moment, and one he was to regret, as he was soundly defeated as a result. Politics, red in tooth and claw. I drew Gove stabbing Johnson in the back; the blade goes straight through and it stabs him in the front.

Who’s your favourite politician to draw?

There are quite a few! Michael Gove, Jacob Rees-Mogg, Boris Johnson, Dominic Cummings, Diane Abbott, Corbyn, Milne, Farage, Trump... usually the ones for whom I have the most contempt.

What do you like most about being a cartoonist?

I most like the freedom I’m given to air my political grievances and prejudices on half a page in The Times four days a week! And I masochistically enjoy the process of it all, whereby I agonisingly struggle daily with ideas until I find that Eureka moment... if I’m lucky. It’s an immense privilege.

What’s one thing you hope people will take away from your book?

After five books, over ten years, I hope most of all that people might take away the sense that, unlike our current politics, I’m not in terminal decline! And despite the whole sorry mess we’re in, I hope people can, along with me, laugh at it all. Albeit bleakly!

Peter Brookes’ new book, Critical Times, is out now. Shop for it here on Amazon and Waterstones, or catch him at the Cheltenham Literary Festival in 12th October.