Roger Mosey introduces 20 Things That Would Make the News Better 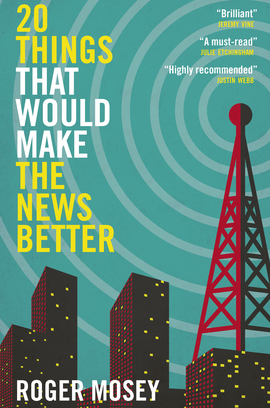 The news headlines this year have been particularly grim, especially from the war in Ukraine. But we have been living for a while now in times of deep uncertainty, with our emotions stirred not just by the events around us but also by the way that they’re reported. The news never stops: our phones ping with the latest developments, and social media then whips up storms in which there is no opportunity for quiet contemplation.

20 Things That Would Make the News Better argues that the news doesn’t need to be like this. The public service broadcasters still attract millions of viewers to their content on TV, radio and online, and they are the places we can go for guidance on what matters and what doesn’t. Amid all the screaming hysteria of Twitter and the like, calm analysis still cuts through – and it’s what we need, now and in the future, to make sense of the world.

The challenge is that public service broadcasting is far from perfect. The BBC in particular has an obligation to reflect the whole of the country and the views of a vast and diverse range of audiences; and, along with much of the rest of the media, it has struggled on some of the biggest stories of recent years. For instance, I explain how some of the BBC’s editors in the regions were very clear about the way the Brexit referendum campaign was heading, but their opinions were not heard by the decision-makers in London. And I suggest ways we can avoid these traps in future – through greater investment and, crucially, giving real power to the nations and regions of the UK.

There are voices arguing that traditional broadcasting has had its day and impartiality is a concept that no longer has value when raw opinion can be much more stimulating and engaging. I disagree. The polling evidence is unambiguous that the public want unbiased news, but nobody should underestimate the effort needed to preserve it – especially when politicians are busy tinkering with the BBC’s licence fee and seeking to privatise Channel 4. However, it is also a consequence of mandatory public funding that every member of the nation should believe that their voice matters and that they are not ignored by the smart young folk in the metropolitan newsrooms.

Everyone will have a view on how the news we consume could be improved. I began talking about ten things that would make the news better in a lecture in 2018, and it is friends and colleagues who have doubled the number and contributed ideas along the way. I’m pleased that some of the leading lights in the industry have spoken to me on the record

about their takes on these themes. There are some provocations, too. Does Brenda from Bristol, whose complaint about another general election went viral, justify the number of times reporters are sent out onto the streets to conduct vox pops? Or would it be better to spend that time telling us what is actually happening around the world today?

There is much at stake. Events, and the way they are reported, could overwhelm us. But we know what keeps our society together, and the question for us now is how hard we will fight to protect high-quality news service. My fear is that once lost, they will never return; the battle for better news is real and urgent and very important indeed.

Intrigued? Order your copy of 20 Things That Would Make the News Better here.