The Corruption of Capitalism: Why Rentiers thrive and Work does not pay 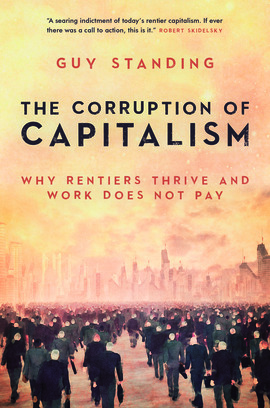 Recent events around the purported European Super League; the shenanigans with David Cameron and illicit lobbying; the revolving doors between politics, the civil service and big finance are all integral aspects of rentier capitalism described in this book. While the identity of specific opportunistic rogues is not predictable, the phenomena their activities represent are entirely so.

The fear should be that once all the fuss dies down, a tweak or two to legislation and behavioural regulations will be made and the underlying malaise will be allowed to continue. This book is a stark warning that this would be a grave mistake.

It is a lie to say we have a free market economy. It is rigged in favour of rentiers, the owners of financial, physical and intellectual property. It is institutionalised rent-seeking corruption, in which morally flaky characters can make millions, if not billions, mostly by staying within the bounds of formal legality.

Nothing is more revealing about the outcome of all this than the fact that the growth of finance has reached the point where the so-called value of financial assets in the UK is over 1,000 per cent of GDP, which is much higher than any other OECD country. Moreover, wealth has risen from about 300 per cent of GDP to over 700 per cent, and wealth inequality is much greater than income inequality, exposing as nonsense the claim by some commentators that inequality has not grown by much.

The book explores the systemic measures by which these trends have occurred. While giving a special focus to what has been happening in the United Kingdom, it puts that in the context of what has been happening globally. Among other issues, it argues that the Covid-19 pandemic has been made much worse by the economic changes that preceded it, which created a uniquely fragile economic system without any robustness or resilience. But true to form, the rentiers have done extremely well out of the pandemic, while those who rely on labour and work for their incomes will see their situation further deteriorate in its wake.

The Corruption of Capitalism stemmed from the author’s earlier work on the growth of a new mass class in Britain and around the world, namely the precariat. Contrary to a very sanguine view expressed in The Economist in April this year, the precariat is steadily growing, partly for reasons outlined in this book. The debt mechanisms extended by financial institutions mean that millions of people are living on the edge of unsustainable debt. Something will have to change, soon.

The book concludes by setting out the nucleus of a remedial transformational strategy, including a revival of the commons. At that point, one might just think of all those football clubs, all set up initially as a social commons. Could we have them back, please?

Guy Standing's book The Corruption of Capitalism is out now: buy your copy here!