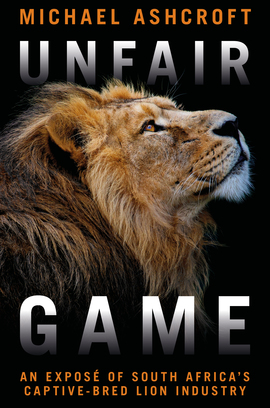 In April 2019, Lord Ashcroft published the results of his year-long investigation into South Africa’s captive-bred lion industry. Over eleven pages of a single edition of the Mail on Sunday, he showed why this sickening trade, which involves appalling cruelty to the ‘King of the Savannah’ from birth to death, has become a stain on the country.

Unfair Game features the shocking results of a new undercover operation Lord Ashcroft has carried out into South Africa’s lion business. In this powerful exposé, he highlights the increasing dangers to public health which lions and their body parts pose. Just as China’s wet markets are widely considered to have led to Covid-19, some experts predict that the rampant trade in lion bones will spark another major health crisis.

The book also shows how wild lions are being captured to widen the gene pool of the country’s 12,000 captive-bred lions; details how tourists are unwittingly being used to support the abuse of lions; and demonstrates why Asia’s insatiable appetite for lion bones has become a multi-million-dollar business linked to criminality and corruption which now underpins South Africa’s captive lion industry.

Lord Ashcroft proves that novel ways of hunting captive-bred lions in enclosed spaces for ‘sport’ are being dreamt up by lion traders all the time, including killing them with dogs; and he confirms that the trade in cross-breeding lions and tigers to produce freaks of nature known as ligers – which are sold for thousands of dollars – is thriving.

Perhaps most disturbingly, Unfair Game reveals how South Africa’s laws and authorities have enabled the small group which controls the lion industry to profit from this misery. The book’s shocking conclusion shows that the reluctance to tackle this most pressing issue has even reached the highest levels of the police force.

Lord Ashcroft further uses this project to renew his call to the British government to ban the import of captive-bred lion trophies.

Commenting on Unfair Game, explorer and conservationist Sir Ranulph Fiennes, who has written the foreword, says: “Lord Ashcroft’s investigation of the captive-bred lion industry is timely, and I welcome it wholeheartedly. It is our responsibility to hand over the baton to the next generation with South Africa’s captive-bred lion industry consigned firmly and permanently to the dustbin of history. I hope sincerely that this book will go a long way towards helping to do just that.”

Technology Academy, chancellor of Anglia Ruskin University, a senior fellow of the International Strategic Studies Association and a former trustee of Imperial War Museums. His books include Victoria Cross Heroes: Volumes I and II; Call Me Dave: The Unauthorised Biography of David Cameron; White Flag? An Examination of the UK’s Defence Capability and Jacob’s Ladder: The Unauthorised Biography of Jacob Rees-Mogg.