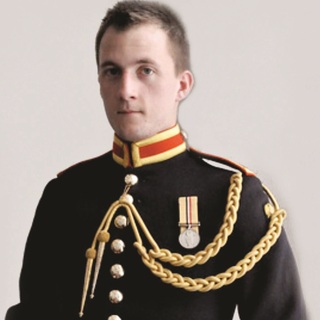 James Wharton is one of Britain's first openly gay soldiers

James Wharton, originally from north Wales, joined the British Army in August 2003. On completion of his initial training he entered the ranks of the Household Cavalry, choosing to become a member of the elite Blues and Royals. In 2007, James served in southern Iraq for seven months carrying out his duties as an Armoured Reconnaissance soldier. In 2008 he spent four months assisting in the training of other troops preparing for active service at the British Army's training facility in Alberta, Canada, serving as the gunner to Prince Harry. James has played a part on all major state occasions including the State Opening of Parliament, Lord Mayors Parade, Cenotaph Parade, and the Queen’s Birthday Parade. In April 2011, James was honoured to be escorting the Sovereign on the occasion of the Duke and Duchess of Cambridge's wedding. It would be the last state ceremonial occasion James participated in.

James was the first openly gay person to appear on the front cover of Soldier magazine, the British Army's official publication, which also had an in-depth article on James' life as its feature. Marrying his long-term partner Thomas in March 2010 James and his husband became the first same sex couple to have their relationship formalised in the Household Cavalry's 360-year history. More so, they enjoyed the celebrations within the very walls of the Knightsbridge based barracks – where James came out at the age of 18.

James has modeled for Ross Watson, who created a painting and several photographic portraits of him in August 2011; some of which have been bought by Sir Elton John. The painting and portraits made their debut in December 2011 in Sydney at Ross’s 25th anniversary in art exhibition. James would later open his Melbourne and London exhibitions and remains a close friend to Ross, and a collector of his work.

James has toured secondary schools in the UK as a role model for Stonewall and has featured in their Role Model guide. He was ranked in the top 20 of the Independent on Sunday's Pink List for three consecutive years, was awarded the Freedom of the City of London in 2014 and made an honorary Fellow of Glyndrw University in 2015 in recognition of his contribution to the UK LGBT community.

He’s written two books: Out in the Army – a biography charting his experiences as an out gay soldier, and Something For The Weekend – which explores chemsex culture in London and beyond.

Favourite books:
1. The Five People You Meet in Heaven, by Mitch Albom
This is the perfect book for someone who doesn’t particularly believe in god and religion. It’s an alternative ending of one’s life and throws out another answer to the great question: What happens next?

2. The Life and Times of Harvey Milk, by Randy Shilts
Harvey Milk is one of my heroes. I’m fascinated by who he was and the life he lead before becoming a beacon of gay rights and the gay rights movement of America. The book informs the reader that although Milk’s public life was surrounded with intolerance and ultimately ended in tragedy; his personal life was equally as hard fought.

3. The Kite Runner, by Khaled Hosseini
I read the Kite Runner whilst serving in Basra in 2007 and was incredibly moved by the story and the underlying theme of personal and cultural tragedy felt by the people of Afghanistan in the latter part of the last century.

Something For The Weekend
Out In The Army