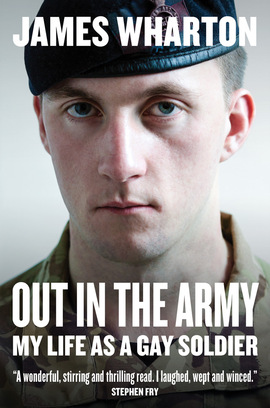 Out In The Army My Life as a Gay Soldier

Seeking escape from the quiet countryside of North Wales, the young James Wharton joined the British Army with adventure on his mind – and he found it…

At basic training, boozing and brawling accompany the daily trials of army life, but all the while James faces a battle of his own: he is gay, and finding the courage to tell not only his family and friends but also his fellow soldiers will be the biggest challenge of all.

Written with searing honesty, and updated to include a new chapter, James charts his incredible journey from punchbag to poster boy, describing the troubles and trials of coming to terms with his sexuality via late nights in Soho clubs and early mornings at ceremonial events.

The first openly gay person to appear on the cover of Soldier, the British Army’s official magazine, James has played an active role in developing support networks for gay men and women within the forces.

A courageous and candid account from the soldier who escorted the Queen to the wedding of Prince William and Kate Middleton, endured rocket attacks in the deserts of Iraq and served alongside Prince Harry on the plains of Canada – this is James’s life out in the army.

[A] heartfelt account of a gay man’s journey from recruit to veteran, as well as a non-judgemental appraisal of an institution’s efforts to move with the times. On both counts it is a worthwhile read.

A wonderful, stirring and thrilling read. I laughed, wept and winced...

An inspiring read from start to finish...

A highly readable and distinctly twenty-first-century boy’s own tale...

Out in the Army is the most moving book I have recently read...

Out in the Army is a truly unique look at a soldier’s journey from boy to man, from Wales to war. I couldn’t put it down.

A deeply moving and personal insight into life in the army...

A fascinating and charming insight...