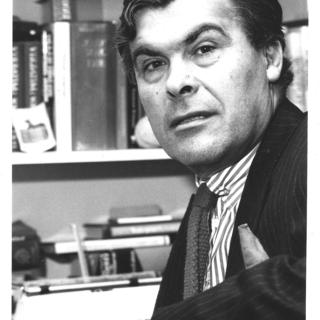 Philip Howard is former Literary Editor of The Times and is the erudite author of numerous popular books on the English language, including Word-Watching, Words Fail Me and A Word in Your Ear. His Lost Words column appears weekly in The Times.

Philip Nicholas Charles Howard is former Literary Editor of The Times and is the erudite author of numerous popular books on the English language, including Word-Watching, Words Fail Me and A Word in Your Ear. His Lost Words column appears weekly in The Times. He was born on the 2nd November 1933, to Peter Howard, captain of the England national rugby union team, and mother, Doe, a Wimbledon ladies doubles champion. He was educated at Culford School and Cheam School, was a King's Scholar at Eton College and became a major scholar at Trinity College, Oxford, where he was a Greyhound rugby player. He is married to Myrtle Houldsworth, and has three children and six grand-children, and also a long line of dogs: Beagles, then Jack Russells.

1. Hamlet, by William Shakespeare - I must have Shakespeare. Hamlet, by a short head from Lear, Othello and Antony and Cleopatra. Hamlet is a funster and a punster who loves language as well as Ophelia (I think). His mind is very opal, and a doublet of changeable taffeta. His play is a lake in which elephants can swim and lambs can paddle. He has given the language more idioms and quotes than any other book, except King James' translation of the Bible, with which he was suspiciously familiar. (Was Shakespeare one of the translators? O come on.) I do not see how one could not have him.

3. Mulliner, by P. G. Wodehouse - Then Wodehouse. Not Bertie and Jeeves, who have been vulgarised by popularisation off the page. Not even The Great Sermon Handicap, the funniest short story ever written. But Mulliner. The sage in the corner of the Angler's Arms, who stoppeth three of three to tell them amazing stories about his nephews and nieces. ‘Mulliner's Buck-U-Uppoo’, ‘Something Squishy’ – just writing the names makes me double up. As a small boy I kept my brother awake by laughing over Mulliner by torchlight after lights-out. Cambridge gave Wodehouse his degree before the War for Mulliner, not Bertie. Well played, Tabs.