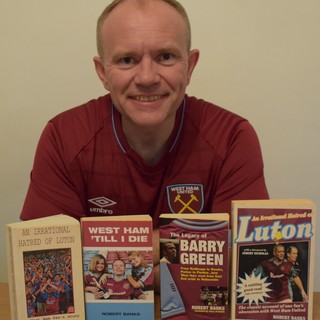 Robert Banks started supporting West Ham as an impressionable six-year-old after seeing them win the FA Cup in 1975. He has written three bestselling books charting his personal trials and tribulations as a Hammers fan struggling to come to terms with life in general: An Irrational Hatred of Luton (1995), West Ham Till I Die (2000) and The Legacy of Barry Green (2003). He started his football writing career contributing to the fanzine Over Land and Sea and was a regular columnist for Hammers News. He is a regular guest on the podcast Stop! Hammer Time. He lives with his wife Elaine and plans to retire to Brazil, though probably not from the proceeds of this book.