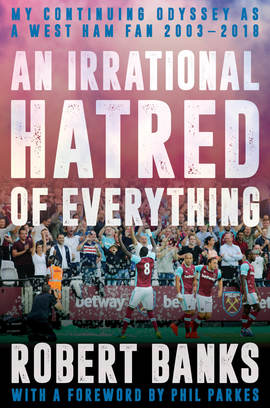 An Irrational Hatred of Luton author Robert Banks is back with his latest instalment in West Ham’s journey through the football leagues to recount the past fifteen years of his life as a long-suffering Hammers fan.

Picking up where he left off in 2003, Banks charts the varying fortunes of West Ham United alongside the mutable modern nature of the beautiful game in An Irrational Hatred of Everything. Cataloguing a stadium move, an Icelandic banking collapse, takeovers, hirings and firings as well as promotions and relegations, Banks follows West Ham’s ups and downs in a refreshingly frank and humorous account of the club’s recent history.

Through an interconnected exploration of West Ham’s progress and the important moments in his own life, Banks continues along the torturous road of detailing his tumultuous relationship with the club to show how much football can mean to the individual – while providing sobering reminders that, at the end of the day, it’s only a game.

Once again ‘Banksy’ is back doing what he does best, painting a vivid picture of the joy and pain that comes with being a Hammers fan.

Pete May, author of Goodbye to Boleyn: West Ham’s Final Season at Upton Park and the Big Kick-off at Stratford

They may destroy our home and our heritage, but they will never take away our sense of humour: it’s what sets West Ham fans apart. Robert’s book is a bittersweet look back on the hard-knock life of a Hammer.

Jeremy Nicholas, writer, broadcaster and voice of the Boleyn Ground 1998–2014

Passionate, poignant and piercingly perceptive, An Irrational Hatred of Everything isn’t about hate at all: it’s a love story that puts family and football in their rightful places. A must-read for all West Ham fans, this book will strike a major chord with supporters of other clubs too.

Brian Williams, author of Nearly Reach the Sky: A Farewell to Upton Park