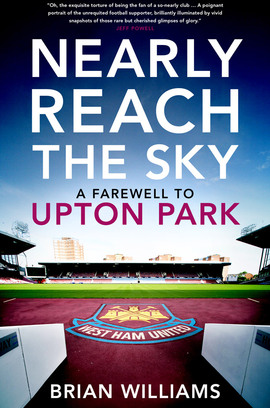 Nearly Reach the Sky A Farewell to Upton Park

If supporting his club for fifty years has taught Brian Williams one thing it’s that football fans definitely need a sense of humour – how else would they cope with the trials and tribulations that are part and parcel of cheering on their team?

In this frank and funny take on the travails of a die-hard football supporter, Williams takes a nostalgic look back at some of the great players, great triumphs and great calamities that have marked West Ham’s time at Upton Park, exploring the club’s influence on its fans, the East End and football as a whole over the course of a lifetime.

A Fever Pitch for the Premier League generation, Nearly Reach the Sky is an anecdotal journey through the seminal goals, games, fouls and finals, told with all the comedy, tragedy and irrationality fans of any team will recognise. This is a witty, fond, passionate and poignant tribute to the end of an era at Upton Park, as well as a universal meditation on the perks and perils of football fandom.

Brian Williams has got in ahead of the crowd … lovingly poring over every detail of his life as a fan, and the Upton Park match day experience.

Whichever team you support, Nearly Reach the Sky is a smashing read, beautifully written – even if it is about West Ham and I’m a Sheffield United fan.

Oh, the exquisite torture of being the fan of a so-nearly club … A poignant portrait of the unrequited football supporter, brilliantly illuminated by vivid snapshots of those rare but cherished glimpses of glory.

Paperback Book of the Month: Funny, honest and poignant, a romantic yet also realistic account that anyone who supports a club that doesn’t happen to be a billionaire’s plaything will instantly recognise and identify with.

Simply brilliant … Nearly Reach the Sky is a truly fitting send-off to a ground that will always be our spiritual home.

Moore Than Just A Club