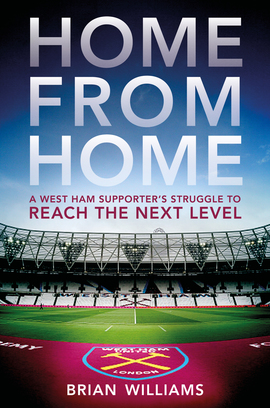 ‘Before you say anything, let me be the first to admit that relocating from one football stadium to another to watch a bunch of highly paid young men kick a ball about is not the most serious crisis facing humankind in these worrying times. But it is a big issue for me.’ – Brian Williams

West Ham United, the object of an irrational affection that has dominated the life of journalist and writer Brian Williams, has moved from its old home to what was the Olympic Stadium in Stratford. It is not a move he welcomed.

It's not just the football itself. The supporters have left behind all the match day rituals that go with the game. A pint in the Denmark Arms, a hot dog in Priory Road, an occasional trip to the wonderful Newham Bookshop. East Ham is a residential area, with all the amenities that go with it. The same cannot be said of the Olympic Park, which surrounds the new stadium. No pubs, no chippies – and certainly no mobile phone shops like the one in the Barking Road Brian regularly walked past that proudly announced it also sold baby chickens. All of this has been replaced by a soulless stadium and corporate catering, with not a baby chicken to be had for love or money.

Williams charts the most momentous change in his club's history by comparing the last season at his beloved Boleyn Ground with the first at West Ham's new home. In doing so he delivers a passionate lament for a time when football was the people's game, not a cynical exercise in developing a customer base or building a marketable brand. A cri de coeur that will ring true not just for battle scarred Hammers, but with fans of all clubs, great and small.