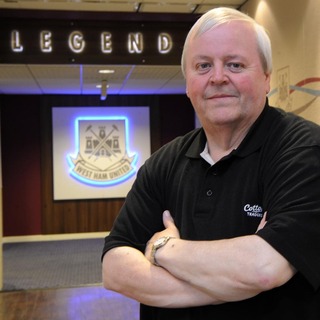 Steve Bacon started taking pictures of West Ham United in the mid-1970s and was subsequently invited by manager, John Lyall, to adopt the role of official photographer in 1980 – since when he has become an integral part of the famous club’s fabric. The son of a Billingsgate fish porter, Steve grew up supporting the Hammers and enjoyed his big professional breakthrough when Arthur Edwards entrusted him to assume his local agency work in order to become The Sun’s royal photographer.

Once embraced by West Ham in an official capacity, Steve quickly established himself as one of the club’s most popular characters – fulfilling a number of informal roles behind the scenes – and is recognised by players and fans at football grounds around the country. His association with the Hammers has outlived that of all others in the modern era and his work continues to appear in the various editions of the Recorder, to whom he has contributed images for 35 years. Steve’s lavishly produced pictorial book, Hammers In Focus – A Photographic History Over Three Decades, was published in 1998.

1. Just Like My Dreams, by John Lyall - I owe so much for the former West Ham manager whose love for football comes across in his autobiography.

2. The Autobiography, by Paulo Di Canio - a crazy character whose story is a great read.

3. Better Late Than Never, by Len Goodman - had the pleasure of meeting him recently and enjoy his book.

There's Only One Stevie Bacon