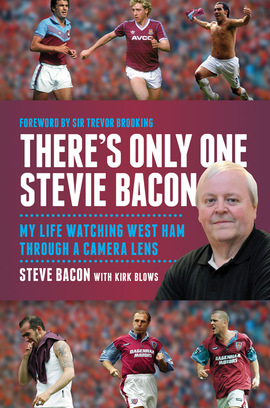 By Kirk Blows and Steve Bacon

He has never scored a goal, lifted a trophy, worn the captain’s armband or even played for the club, but Steve Bacon is considered a genuine Hammers legend. As West Ham United’s official photographer for more than thirty years, Steve has become a cult hero at Upton Park – he has appeared on Sky’s Soccer AM, featured in a fanzine comic strip and even had a burger named after him. From his privileged position as part of the club’s backroom team, Steve has enjoyed unlimited access behind the scenes and established close friendships with many managers and players. John Lyall, Lou Macari, Billy Bonds, Harry Redknapp, Glenn Roeder, Alan Pardew, Alan Curbishley, Gianfranco Zola, Avram Grant and Sam Allardyce have all found themselves the focus of Bacon’s candid camera, while Trevor Brooking, Tony Cottee, Frank McAvennie, Julian Dicks, Rio Ferdinand, Frank Lampard, Paolo Di Canio and Scott Parker are just a few of the star players who have welcomed him into their world. Packed with terrific tales, amusing anecdotes and controversial characters, and illustrated with the very best of Steve’s photographs, There’s Only One Stevie Bacon offers an intriguing insight into life at the Boleyn Ground and one that no West Ham United fan will want to miss.

It is simply a must-read for all West Ham fans

Mixed in with the gossip, Bacon has some astute observations about both players and managers over the years

Pete May, Hammers in the Heart

Get It On
Kicking Back
Thomas Tuchel
Sacré Bleu