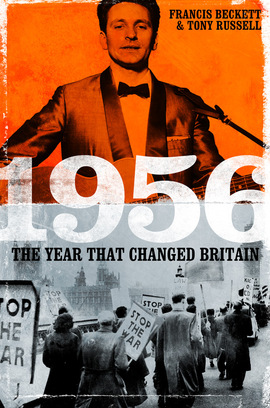 1956 The Year that Changed Britain

By Francis Beckett and Tony Russell

1956: a defining year that heralded the modern era.

Britain and France occupied Suez, and the Soviet Union tanks rolled into Hungary. Nikita Khrushchev’s ‘secret speech’ exposed the crimes of Stalin, and the Royal Court Theatre unveiled John Osborne’s Look Back in Anger. Rock ’n’ roll music was replacing the gentle pop songs of Mum and Dad’s generation, and it was the first full year of independent television.

As post-war assumptions were shattered, the upper middle class was shaken and the communist left was shocked, radical new ideas about sex, skiffle and socialism emerged, and attitudes shifted on an unprecedented scale – precipitated by the decline of Attlee’s Britain and the first intimations of Thatcher’s.

From politics and conflict to sport and entertainment, this extraordinary book transports us back in time on a whirlwind journey through the history, headlines and happenings of this most momentous of years, vividly
capturing the revolutionary spirit of 1956 – the year that changed Britain.

Read co-author Francis Beckett's blog post on on changing attitudes to sex in the '50s.

“The authors have a great eye for the unexpected and the unintentionally comic as the hierarchies of postwar Britain come apart.”

“[A] brilliant account of a seminal year... A masterly overview of society moving from post-war austerity to disillusionment with the established order. Its greatest strength is its telling detail.”

“1956 is a brilliant concept. It uncovers all the shining stones of the year, tosses each in the waters of time and allows the ripples to ebb and flow backwards to the past and forwards to the future.”

“Francis Beckett and Tony Russell make an indisputable case for 1956 as ‘the year that changed Britain’.”

“A chatty, informal tour d’horizon of Blighty at a turning point.”

“An absorbing social study of the year, […showing how] events small and large helped to shape the British people and change their values for ever.”

'A wonderfully evocative and thoughtful account of a year that saw the ends and beginnings that explain why and how we got to today.'

'Beckett and Russell have done a wonderful job of recreating 1956, the year that shaped the rest of the century. They have brilliantly illuminated the taste and texture of the mid-1950s – the shift in class, culture and perception of Britain, the music, the theatre, the cinema, the momentous politics, the sex (or lack of it) – so that those of us who were there can recognise it instantly, and those who were not will understand why it was so pivotal. An important and absorbing living history book.'