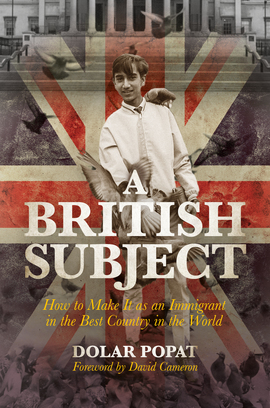 Fleeing Idi Amin’s regime, seventeen year-old Ugandan Indian immigrant Dolar Popat landed at Heathrow in 1971 with just £10 and a cardboard suitcase to his name – but with everything to prove.

Fuelled by a tenacious entrepreneurial spirit, a sharp talent for finance and an unparalleled drive for success, Popat worked relentlessly to pay his gratitude to the country that offered him a fresh start: Great Britain. With this same passion, he tells the incredible story of his journey from Wimpy Bar waiter to business magnate to member of the House of Lords.

Despite battling prejudice, he found allies in the Conservative Party and, with guidance from David Cameron and his spiritual leader, Morari Bapu, has become one of the most influential people in commerce and politics today. Full of life lessons and business wisdom, A British Subject is a timely testament to the importance of integration in Britain.

A love letter to his adopted country, this is the inspirational tale of how the barefoot boy from the streets of Tororo now treads the corridors of Parliament.

“Dolar’s work to bring the Conservative Party and the British Indian community together shows how you can change the electoral landscape in the UK. For over a decade he was a vital member of the team that helped to modernise the Conservative Party, and this book is a reminder of all we achieved together.”

“Dolar’s story shows the importance of integrating in Britain and embracing British values. His patriotism, business knowledge and frankness burst off every page. He is a real advert for post-Brexit Britain.”

Alan Sugar, entrepreneur and star of The Apprentice

“Dolar’s story has to be read to be believed. From the streets of Uganda to the House of Lords, he tells his incredible tale with his usual modesty and humour.”

“Dolar tells the remarkable story of the Asians who were forced to flee Uganda and then flourished in Britain. He saw with his own eyes the coup that brought Idi Amin to power. Very few authors speak with more honesty about postcolonial Africa and what integration for immigrant communities actually looks like.”