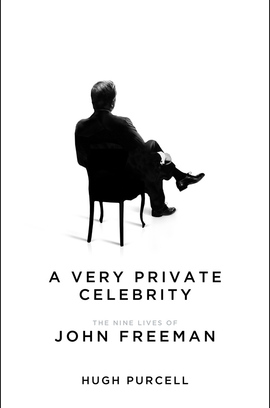 A Very Private Celebrity The Nine Lives of John Freeman

John Freeman was one of Britain’s most extraordinary public figures for over half a century: a renaissance man who constantly reinvented himself; a household name who sought complete anonymity.

From advertising executive to war hero to MP tipped to be Prime Minister, Freeman then changed direction to become a seminal television interviewer and editor of the New Statesman. He subsequently remodelled himself yet again to become, in turn, an ambassador, a TV mogul, a university professor and, finally, in retirement, a well-known bowls player in south London. Freeman packed nine lives into his ninety-nine years, but all he really wanted was to be forgotten.

The paradox of this private celebrity was captured by the very series that made him famous: Face to Face. While Freeman remorselessly interrogated the stars of his age, he himself sat in the shadows, his back to the camera. He was the grand inquisitor, exposing the personalities behind the public figures – but never his own.

For ten years, Hugh Purcell has been tracking Freeman’s story, trying to come face to face with this enigma who believed in changing his life – and his wife – every ten years. Why did Freeman want to forget what most old men would be proud to remember? Why did he try to erase himself from history?

And yet, despite Freeman’s best efforts to be ignored, his death in 2014 was marked by an enormous outpouring of appreciation and admiration. With his life now free from its shroud of inscrutability, the true story of this incredibly multifaceted man can finally be told.

A fascinating biography of a remarkable – and mysterious – man. The real John Freeman might be as elusive as the Holy Grail, but Hugh Purcell made it his quest. Anyone interested in the nature of British politics and broadcasting in the twentieth century should be grateful that he has done so.

War hero, politician, journalist, ambassador, pioneering TV interviewer – John Freeman had a remarkable career. But who was he? What did he want? And why did he wish to escape his fame? In this enthralling biography, Hugh Purcell unravels the enigma of a truly complex and charismatic man whose life defined the twentieth century.

[Hugh Purcell] manages to piece together Freeman’s life in a progression of vignettes so astonishing that it is almost impossible to believe they are portraits of the same person.

[Hugh Purcell] has fresh and sometimes startling facts to present about nearly all of Freeman’s 'lives' and this book has, for me at least, something new on almost every page.

'A revealing portrait of one of the oddest and most elusive fish to have swum through the reaches of the British ruling class at its apogee.'