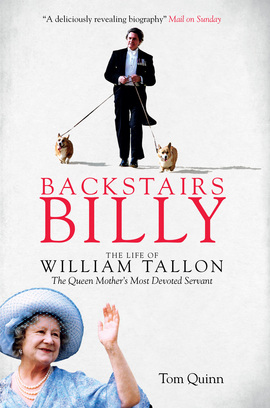 Backstairs Billy The life of William Tallon, the Queen Mother's Most Devoted Servant

From humble beginnings as a shopkeeper’s son in Coventry to ‘Page of the Backstairs’ at Clarence House, William Tallon, or ‘Backstairs Billy’ as he came to be known, always knew he was destined for a life in the royal circle. A fierce collector and fan of all things related to the royal family, even as a small boy Billy was fascinated by this glamorous world of pageantry and excess.

Charming, loyal, promiscuous and in possession of a truly wicked sense of humour, Billy entered royal service at the age of fifteen and, over the next fifty years, became one of the most notorious figures, and most remarkable characters, ever to have graced the royal household.

Although nominally a servant, over time Billy became one of the late Queen Mother’s most trusted friends and confidants. While others came and went, Billy was the one servant the Queen Mother just could not do without. She adored him, and he her, perhaps because of his high camp style or his witty and provocative remarks about the well-born equerries, royal press people and advisers.

Sometimes scandalous, often shocking, always entertaining, Backstairs Billy is the fascinating life story of the man who spent more than half a century working for one of the world’s most elusive institutions, giving us a rare glimpse of what life in the British royal family is really like…

“Quinn’s biography provides a fascinating downstairs angle on the Royals’ upstairs life, with lots of unexpected details: for example, that the Queen Mum’s comic turns included impersonations of Blackadder and (brace yourself) Ali G.”