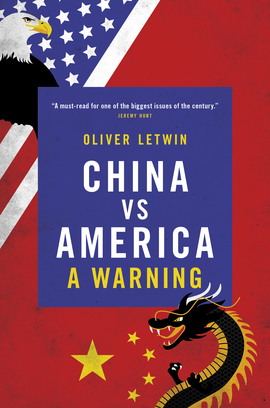 China vs America A Warning

China’s rise as a global superpower has completely reshaped the landscape of international politics. As the country’s authoritarian regime becomes increasingly assertive on the world stage, the United States grows ever more hostile to its Asian rival. Repressive moves by China in Xinjiang and Hong Kong, military activities in the South China Sea and Western measures against Chinese companies have only exacerbated tensions. While the great powers of East and West battle over hegemony, the world is being led inexorably towards a new Cold War.

During his time as a Cabinet minister attending National Security Council meetings, Oliver Letwin realised that there was no agreement among Western politicians and academics on how to conduct a peaceful long-term relationship with China. China vs America traces the contours of history, both ancient and modern, to explain how China has emerged as a challenger to American power in the twenty-first century and why this has created such uneasiness in the West.

In this robust and controversial assessment, Letwin argues that the international rules-based order is completely ill-equipped to foster a positive relationship between China and the United States and that the global community must act now to correct the collision course these two behemoths are currently on before it’s too late.

“Oliver Letwin has provided an extraordinarily thoughtful contribution to the debate about how we should react to the rise of China. He challenges many common assumptions made on both sides – this is a must-read for one of the biggest issues of the century.”

“It’s time we had a proper conversation about how we can live with China, and this is a book which starts that discussion, considering the world we are actually living in rather than the one we used to live in.”