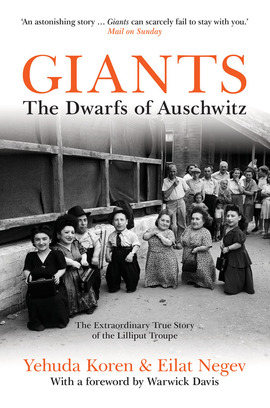 Giants The Dwarfs of Auschwitz

By Eilat Negev and Yehuda Koren

‘Through thick and thin, never separate. Stick together, guard each other, and live for one another.’
As Hitler’s war intensified, the Ovitz family would have good reason to stand by their mother’s mantra. Descending from the cattle train into the death camp of Auschwitz, all twelve emerged in 1945 as survivors – the largest family to survive intact.
What saved them? Ironically, the fact that they were sought out by the ‘Angel of Death’ himself – Dr Joseph Mengele. For seven of the Ovitzes were dwarfs – and not just any dwarfs, but a beloved and highly successful vaudeville act known as the Lilliput Troupe. Together, they were the only all-dwarf ensemble with a full show of their own in the history of entertainment. The Ovitzes intrigued Mengele, and amongst the thousands on whom he performed his loathsome experiments, they became his prize ‘patients’: ‘You’re something special, not like the rest of them.’ It was this disturbing affection that saved their lives.
After being plunged into the darkest moments in modern history, this remarkable troupe emerged with spirits undimmed, and went on to light up Europe and Israel, which offered them a new home, with their unique performances. Giants reveals their moving and inspirational story.

Their remarkable story, extensively researched, is so beautifully and sympathetically written that it fully deserves to appeal far beyond its core audience.

[An] amazing story sympathetically and eloquently told ... The authors show great respect and affection for the Ovitzes ... Theirs was a life worth living and a story very worth telling.

An astonishing story … Giants can scarcely fail to stay with you.