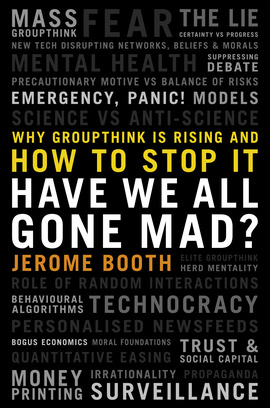 Have We All Gone Mad? Why groupthink is rising and how to stop it

We like to think of ourselves as rational, but human beings are fundamentally irrational creatures – and nowhere is that more apparent than in the fug of groupthink we see around us, from the boardroom to social media.

Of the various forms of collective irrationality, groupthink is particularly dangerous. It involves adherence to a faulty consensus, often has a binary moral dimension (one is seen as either virtuous or evil) and is sustained through fear to challenge. Counter-intuitively, the most intelligent and erudite amongst us are particularly susceptible, and when groupthink takes hold, vigorous efforts are made to shut down debate and to bully and punish transgressors.

As a result, toleration, liberalism, history, reason and science are under threat. Mass groupthink amongst both the elite and the masses affects millions of people. It has led to financial mismanagement leading up to the 2008 crisis and beyond; poor decision-making at the onset of Covid-19; exaggerated, unchallenged claims which have motivated nonsensical policies; and distortions in academia and journalism.

In this remarkable and prescient book, Dr Jerome Booth investigates why some of us have abandoned reason in favour of trite memes, intolerance and hatred. Have we all gone mad? Or can we identify the patterns and causes of what is happening and try to stop it?

“With refreshingly clear-sighted analysis, Jerome Booth spells out how political, financial and social groupthink has damaged Britain – and, crucially, how we can tackle it. Highly recommended.”

“Most of the worst political decisions of recent years were made when all the mainstream politicians thought the same thing and no one challenged them. Jerome Booth wisely analyses why this situation happens so often and what can be done about it. Every politician and every decision-maker should read this book.”

“It is a long time since I read a book with which I agreed so comprehensively.”

“Its well-reasoned argument and clear elucidation of current trends make it a persuasive account.”