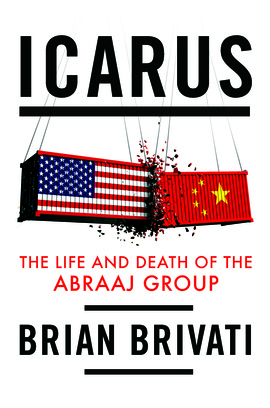 Icarus The Life and Death of the Abraaj Group

In 2017, Arif Naqvi and The Abraaj Group were on the brink of changing the world of private equity. Abraaj was a pioneer of impact investing, it had helped transform communities and companies across the world by financing healthcare, education and clean energy projects, and it was about to close a new fund worth $6 billion. But then it all came crashing down.

On 10 April 2019, after landing at London Heathrow, Naqvi was arrested on fraud charges. He is facing extradition to the United States and a prison sentence of up to 291 years if he is found guilty.

The dominant media narrative has painted Naqvi as a thief and fraudster, the key man in an organised criminal conspiracy. But in this explosive book, which is based on extensive research and interviews, Brian Brivati investigates how things are not quite what they seem. Icarus explores how Abraaj found itself caught in the middle of a geopolitical war between the United States and China, and when it would not back down economic hitmen tried to wipe it out.

“If Abraaj had been allowed to sell its shares in K-Electric to Shanghai Electric, Arif Naqvi would be a free man today. There is more here than meets the eye. How and why was this deal blocked? This book sets out to answer those questions.”

“Doing good and making money should not be incompatible. Arif Naqvi was the leading advocate of how to use private equity to make a difference and his life and achievements deserve a scholarly and balanced assessment to counter the tabloid headlines. Icarus, based on an astonishing depth of research, provides just that.”

"It is balanced and it is fair and most of all it rings true."

"Finally, a narrative worth waiting for"

"There is a lesson in this tale for all of us"

“Brian Brivati is one of the country’s most interesting thinkers on international affairs. He is always challenging and his conclusions never predictable.”

Martin Bright, formerly political editor of the New Statesman and the Jewish Chronicle, his 2003 scoop formed the basis for the film Official Secrets

“Forensic and gripping … Reads like a James Bond novel.”

Have We All Gone Mad?
The Secret Life of Special Advisers
Passport to Success
Life Support