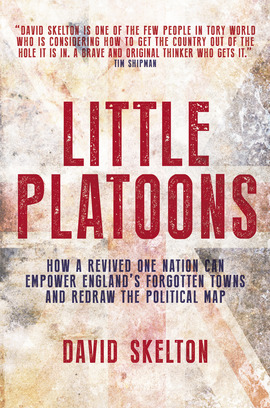 Brexit – a revolutionary moment in British politics. Voters in long-forgotten English towns made their disenchantment clear, overwhelmingly voting to ‘take back control’ from a remote and defective economic system. Despite this decisive message in 2016, the concerns of these forgotten towns have continued to be all but ignored.

David Skelton grew up in Consett, a north-eastern town where the steel industry has deep roots. When the steelworks closed almost forty years ago it lost everything, a story echoed in towns across England. Skelton uses Consett’s experience to discuss what has gone wrong and how we can put it right. He considers a broken social contract and the economic and identity liberalism which has neglected the needs of a great bulk of the population.

Little Platoons calls for a revival of One Nation to recognise the needs of people in such towns. It argues that a brave Tory Party can shatter decades-old boundaries and redraw the political map by marrying social reform with private enterprise, enhancing community values and allowing long-ignored voters to genuinely take back control.

“Digs deep into the challenges facing Britain’s struggling towns and the trends that delivered Brexit.”

“In this fascinating and essential book, David Skelton provides a penetrating analysis of our age of upheaval and offers a blueprint for how to remoralise our politics and heal the wounds that have left too many people in the neglected towns of England feeling ignored and shut out from the prosperity of the metropolitan elites. It’s one of the best and most thoughtful political books I have read for some time. It should be at the top of Boris Johnson’s reading list.”

“A deeply personal and thought-provoking look at the causes of Brexit, at voters and places ‘left behind’, and at what we can do to renew our country.”

“David Skelton is one of the few people in Tory world who is considering how to get the party and the country out of the hole it is in rather than dig deeper. A brave and original thinker who gets it.”