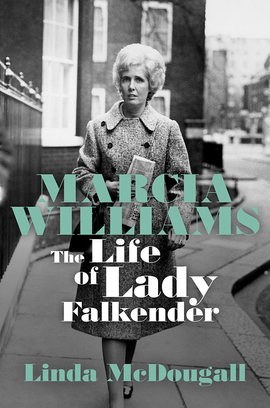 Over a decade before Margaret Thatcher swept to power, another Englishwoman was running Britain from 10 Downing Street: Marcia Williams was the first ever female political adviser to a Prime Minister, and she was said to have a powerful grip on her boss.

Historian Ben Pimlott called the relationship between Marcia and Prime Minister Harold Wilson ‘the most famous and mysterious partnership in modern political history’. Labour Home Secretary Roy Jenkins said Marcia had the best brain and the highest courage of all Wilson’s advisers.

But the young, ambitious men she worked with believed she had the Prime Minister firmly in her control. They said she humiliated him in public and screamed at him behind closed doors. According to them, Wilson was terrified of Marcia and caved in instantly to her eccentric demands. There were strong suggestions that all this was the legacy of a passionate affair when Harold met Marcia back in the ’50s. ‘Not so,’ said Harold and Marcia, and Harold’s wife Mary agreed.

There is no doubt Marcia was outspoken, forthright and by the standards of the time deeply unconventional. But her political skills were unmatched, and certainly in the Wilson governments of the ’60s she guided him to success with a cool hand. This first ever biography of Marcia Williams examines the accusations and assumptions that were a constant accompaniment to her political career.