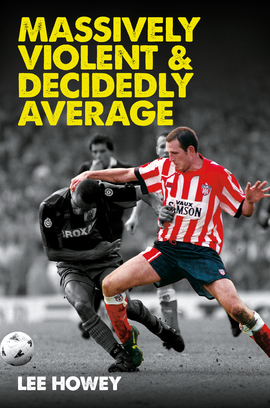 Lee Howey was inspired to write this book after reading the autobiographies of other footballers. These were household names with glory-laden careers whose exploits on the pitch will never be forgotten. Yet, despite access to such fabulous raw material, they have mostly produced bloody awful books – predictable, plodding, repetitive, self-important and just plain boring. They may have been better footballers than Howey, but he has written the most entertaining football memoir you are ever likely to read.

Not that Lee Howey’s football career is in any way undistinguished. He won the First Division Championship with his beloved Sunderland in 1996 and played in the Premier League against some of the most celebrated names in English football, including Jürgen Klinsmann, Ryan Giggs, Eric Cantona, Gianfranco Zola, Peter Schmeichel, Ian Wright, Alan Shearer and Fabrizio Ravanelli – and not always unsuccessfully. It wasn’t all assaults upon the kneecaps on wet Tuesday nights in Hartlepool (though there is plenty of that too).

This honest, thoughtful and hilarious book may not end with an unforgettable game at Wembley, or a 100th England cap. However, it will amuse and delight fans of all teams in its portrait of the game of football before it disappeared up its own backside.

“I have known Lee Howey since I joined Sunderland in 1996. As a footballer I never knew him to do anything other than give his all. Regardless of how much possession of the ball he had, you always knew when he was on the pitch. This is something that became apparent to me, particularly in the area of my calves, the first time I faced him in training. Come to think of it, I’ve never really liked him.”

“Lee has written a wonderful book and, for the years 1993–97 at least, I can confirm that everything in it is true. The only exceptions to this are any sections where my name is mentioned. Apart from bits where I score a great goal or something, I deny everything; especially stuff about… well never mind. No one said this quote had to be long and I still want paying.”

“Lee has produced one of the best football memoirs I’ve read in many a year. I’m delighted he’s finally found something that he’s good at.”

Micky Adams
Get It On
Kicking Back
Thomas Tuchel