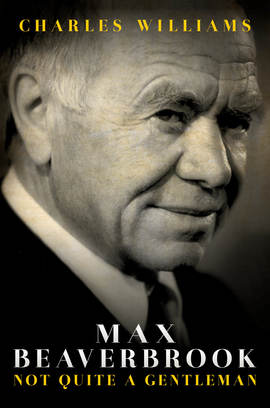 Max Beaverbrook Not Quite A Gentleman

Financial magician, flamboyant politician, minister in both world wars, press baron, serial philanderer, Winston Churchill’s boon companion in the dark days of 1940–41 and in his later years, Max Beaverbrook was without a doubt one of the most colourful characters of the first half of the twentieth century. Born and brought up in the Scottish Presbyterian fastness of northeast Canada, he escaped to make his fortune in Canadian financial markets.

By 1910, when he migrated to Britain at the age of thirty-one, he was already a multimillionaire. With a seat in the House of Commons and then a peerage, he came to know all the senior figures in both British and Canadian politics. In acquiring the Daily Express, he not only built it into a news empire but used its considerable influence to campaign for his own pet causes.

As Charles Williams’s sweeping biography shows, Beaverbrook was loved and loathed in equal measure. Nevertheless, Williams brings to life a rounded character, with all its flaws and virtues. Above all, it is a story of eighty years of entrepreneurism, political dogfights, wars, sex and grand living, all set in the rich tapestry of the dramatic years of the twentieth century.

“This thorough biography leaves one in no doubt that Beaverbrook was an ironclad, ocean-going monster.”

“The Labour peer and much-acclaimed political biographer Charles Williams has written an enthralling account of Max Beaverbrook, the twentieth-century media magnate and political adventurer whose energy and charisma captivated a whole generation of leading figures, including the great war leader Winston Churchill. Lord Williams’s major biography, the first for many years, covers not only Beaverbrook’s journalistic and political career, but also his (at times) questionable financial dealings, his wide circle of friends and his many relationships with women. I simply could not put this book down."

“Charles Williams has brought back to life one of the most flavourful figures of early twentieth-century British politics. His pages emit whiffs of the Beaverbrook sulphur mixed with the charm and energy with which he pursued fame, fortune and influence. Beaverbrook was one of the great fascinators of his time.”

"Williams has a keen eye for good material."